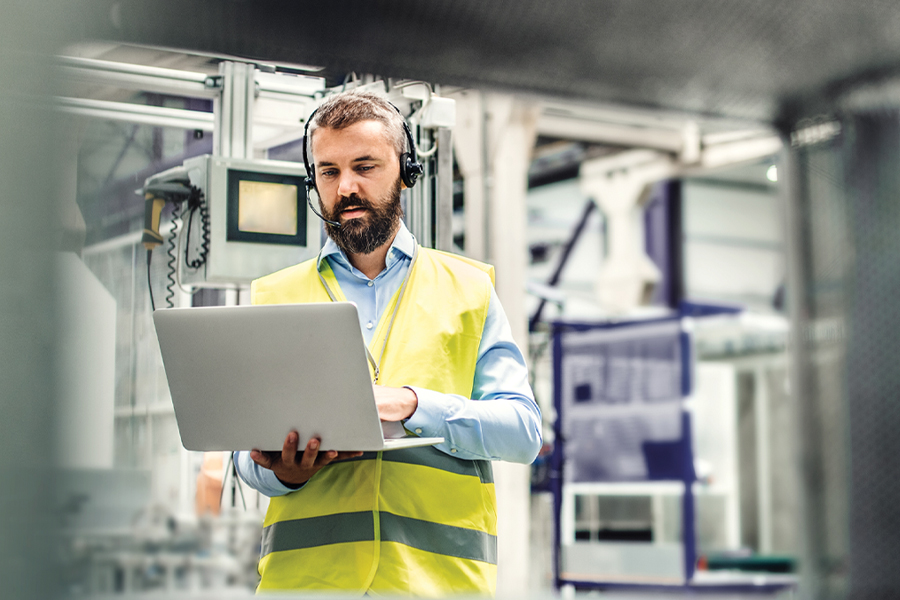 Over the past several years, there’s been what Jon Sobel, CEO and co-founder of a manufacturing data platform called Sight Machine, calls an “explosion” of Industry 4.0 technologies.

“Everybody’s trying to get out of pilot land and get to scale and impact – to some outcomes in the business that matter,” he says.

As a result, the market is teeming with apps promising to use artificial intelligence to improve plant performance. But unless there’s a way to correlate data from different sources in a common language that can be interpreted by the AI, these products may be watered-down solutions to complex manufacturing goals such as avoiding downtime, reducing maintenance costs, improving operational efficiency and predicting asset failure.

Another goal tied to Industry 4.0 became increasingly urgent as the COVID-19 pandemic gripped the sector earlier this year, paralyzing supply chains and forcing many plants into temporary shutdown: manufacturers need real-time visibility across the entire enterprise in order to respond to – and even potentially predict – crises.

Gaining visibility is not as simple as streaming data and analyzing it to spit out some dashboards on the computer. What really makes the difference, Sobel says, is a deep knowledge of the people who need to use that information every day, and the ways humans and machines can collaborate to maximize the production efficiency of an operation.

“The technology by itself won’t get the job done,” he says. “You’ve got to understand the needs of the people.”

Sobel is one of five co-founders of Sight Machine, a Michigan-based start-up established in 2011 that raised nearly $90 million in venture capital to build an analytics platform. The funding went largely toward initial engineering and then the evolution of the product over the last nine years.

The team, who had 15 years of experience in internet, big data and manufacturing, worked with clients to understand need as they continued to develop the platform, which blends data computation with real-time visualization and predictive analytics.

They discovered that while all manufacturers share common goals, there are many of them. The Sight Machine platform would have to address all of those needs, and also allow for quick scaling across many plants – even though every factory within a given company has a different set of data requirements.

“[Manufacturers] all measure OEE, but it’s highly variable from plant to plant and it’s difficult to get a consistent, accurate, real-time view of things,” says Sobel. “Every manufacturer wants to increase uptime. They want to decrease quality issues. They want to manage energy.”

Sight Machine is built on a common technology platform that can be used in any manufacturing vertical – and it’s been used in at least 15 sectors, including automotive, packaging, pulp and paper, food and beverage, medical devices, electronics and glass, in more than 10 countries. The company is currently concentrating on growth in the enterprise manufacturing realm, but the system can be applied to plants of any size.

“If you get your data in shape, then you have an endless array of analytical techniques you can apply,” says Sobel. “Get the foundation to the house right, and it’s easy to build the house.”

“There’s a lot of process data that’s being captured and consumed, or even not consumed at all,” says Alexander Soave, Sight Machine’s senior customer success manager. “We want to make [plants] consume it in a reasonable and fast manner.”

The platform aims to help operators and managers make improvements by streaming data from a variety of information sources in a plant, including, but not limited to, historians, quality systems, MES, ERP, PLCs, SQL, MTConnect, spreadsheets and raw sensor data.

All of these information sources structure their data differently, so the mere act of pulling them together for analysis isn’t enough. Data from a historian and data from a DCS, for example, can’t “talk” to each other. “Simple things that you think would go together, like quality and process data – it’s very hard for companies to blend [them] in any systematic way,” says Sobel.

The missing link is a process that restructures the data into a common language. “As the data is being generated, it’s pulled off of the assets and run through our product, almost like an EKG,” explains Sobel.

As the Sight Machine system acquires data – either via an edge device or the plant’s own cloud, if the company is already sending its data to the cloud – it begins to translate the information, re-tagging it and adding metadata to get it ready for API input. From there, the information gets aggregated into what’s called a data lake – essentially a cloud-based repository for information – which is where Sight Machine organizes the data into useable analytics.

“If you get your data in shape, then you have an endless array of analytical techniques you can apply,” says Sobel. “Get the foundation to the house right, and it’s easy to build the house.”

The technology creates a “digital twin” of the plant, which combines process and product data to form virtual representations of areas such as machines, products, cycles, downtime, assembly and defects.

Then, artificial intelligence and machine learning begin to assess anomalies and create analytics to produce real-time visualizations for the manufacturer, from quality reporting, to engineering diagnostics, to production activity over a period of time, to KPIs on asset performance. Users can design their own reports that illustrate correlations between areas, root causes for problems and recommendations for optimization.

It results in a user experience that, due to a flexible query and visualization layer, feels very customized.

“If you look at what we can do on Google today, you and I can search for anything,” explains Sobel. “There’s an engine under there that finds whatever we want […] but it’s actually driven by a deep product architecture.”

The platform is open, so if a plant is already running factory information systems, Sight Machine can feed processed data into existing software. It also facilitates access to the data for various users across the organization – data scientists may want to look at tables, machine operators can receive sensor information for production lines and individual machines, plant managers may require insight into every line and machine, and corporate managers can access higher-level KPIs across plants and supplier networks.

For example, a glass manufacturer using the system for two months has built 100 different dashboards, for a variety of users across the enterprise.

Alerts allow for operators to be notified if any number of controls are amiss, like if a machine is not operating within spec limits, or if data is for some reason not being streamed to the system due to unexpected downtime.

By corralling data from so many disparate sources, the subscription-based service is also highlighting issues that companies may not have known they had.

In December 2019, a global magnet wire producer with some operations in Canada tapped Sight Machine to improve overall equipment efficiency (OEE) by a measurable and clearly defined increment at one of its plants in Latin America.

As a continuous improvement leader and Six Sigma black belt, Soave works with clients to problem solve in a way that is familiar to them. Pre-COVID, he would meet with customers in person, do a Gemba walk on the floor, then review the plant’s biggest challenges and how data could solve them.

About a month after the factory was fully online, the COVID-19 crisis hit. Part of the plant was locked down, some staff were furloughed, and, as a result, Soave and the Sight Machine team worked remotely to fine-tune the analytics.

While the client thought they had been accurately measuring OEE before the implementation, Sight Machine’s data ingestion and modelling showed they hadn’t been doing it correctly, nor did enough people in the plant have access to the results to even make a measurable impact.

As the manufacturer emerged from shutdown, the plant saw a four times improvement in OEE against the agreed-upon baseline over the span of two months, far exceeding its original goal. Eighty per cent of the plant’s ovens, which are used to cure the magnet wire, saw a seven to nine per cent improvement in performance.

“There’s a lot of process data that’s being captured and consumed [in a plant], or even not consumed at all,” says Soave. “We want to make them consume it in a reasonable and fast manner.”

With that done, the manufacturer has turned to a new problem: reducing scrap. The price pressure and low market demand precipitated by the pandemic underscored the need to demonstrate to customers a tight control on quality.

The Sight Machine team identified over a dozen variables that can affect the amount of scrap when producing magnet wire. To respond, Sight Machine built what it calls a defect prediction analytic, which forecasts when a machine may produce a defect over a 10-minute window, and then highlights why that defect might be occurring.

“If you look data you already have, it tells you how to be as good as the best day you ever had,” Sobel says. “But if you want to be better than you’ve ever been, you’ve got to build a model that predicts when there’s issues and how to avoid them, that goes outside of your past data.”

Getting clients to trust the data and its accuracy is one of the most challenging parts of moving clients to AI-based technology, says Sobel.

But the COVID-19 crisis is helping to push manufacturers in the right direction because of new and urgent requirements for remote access and visibility. In order to be a trailblazer in this space, Sobel says manufacturers need to think about how to amalgamate information from activities that were once separately managed.

“The integration of production data with other data in the enterprise is clearly the next frontier,” he says. “And that’s true for the automation providers as well. Many of the machine builders are moving from, ‘Let’s help our customer understand this machine’ to, ‘Let’s help our customer understand materials usage associated with the machine, or how the fleet of machines is performing, or how everything else in relation to the machine is performing.’”

Integral to making this kind of change happen at any company is somebody who can see the possibilities. Sobel credits the plant leader at the magnet wire factory in Latin America with being the catalyst for change across that whole company.

The magnet wire supplier has more than a dozen facilities around the world – and when senior executives contracted Sight Machine to do the first implementation, it was for a different plant. At Sobel’s encouraging, the company reassigned their test case to the factory that housed the most dynamic leader, who in turn assembled a group of staff eager to dive in.

“Your best plant leader may not have the best plant – but if you get an influential leader who the other plant leaders respect, who cares about progress […] that is a huge key to success in these initiatives,” says Sobel.

“What’s really needed is not technology, but leadership.”

This article originally appeared in the September 2020 edition of Manufacturing AUTOMATION.