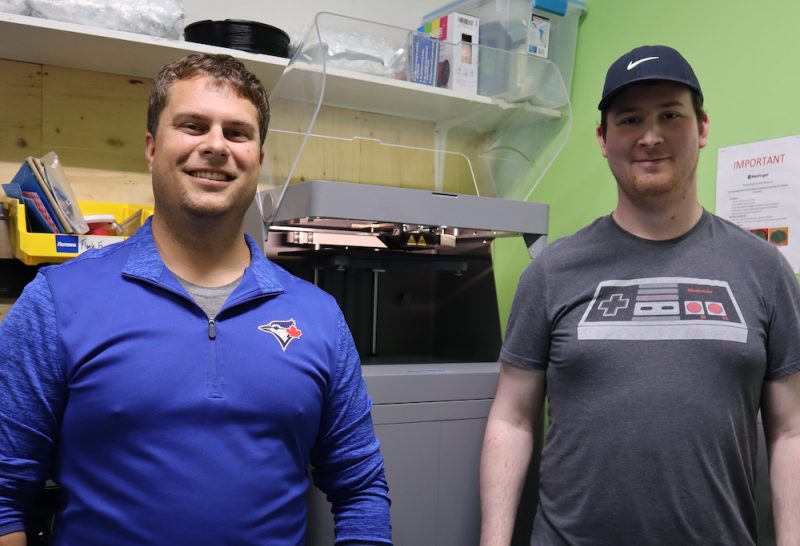 From left: Cody Howell, operations manager at Sure Grip, and Cory Mader, CAD tech, along with their new acquisition. Photo: Sure Grip Hand Controls

Additive manufacturing has become more ubiquitous in the industry over the past decade, but many 3D-printed parts never even see the light of day.

They’re hidden away in machines or in vehicles, or they’re used in tooling on the factory floor itself. Traditionally, that’s meant that while strength and durability are of utmost importance, being visually appealing and providing comfortable hand-feel are not.

So when Sure Grip Hand Controls, a New Brunswick–based manufacturer, needed a new 3D printer that would produce pieces that would be seen, touched and interacted with on a daily basis by end users, the company had to dig in and do some research to find the right solution.

Sure Grip serves a unique market in Canada, designing and producing manual and electronic driving aids for people with disabilities. These include hand controls, switches, knobs, pedals and other products that are retrofitted onto mass-market automobiles so that people with a wide range of physical capabilities can drive.

End users in this market often require bespoke products due to injuries that have resulted in unique physical reconstructions, says Cody Howell, operations manager at Sure Grip Hand Controls.

“Our product generally works for them but the user interface needs to be quite specific,” he says.

“We were spending a lot of time machining and still not coming up with the level of product that we were hoping to get. So we invested in 3D printing to really help that out – for us to make one-off stuff for cheaper and with higher quality.”

Time for an upgrade

As the only hand controls manufacturer in Canada, and one of only three major players in North America, Sure Grip was an early adopter of additive manufacturing in the vehicle controls industry.

In September 2012, the company acquired its first printer, a Stratasys Fortus 250, which uses ABS – also known as acrylonitrile butadiene styrene, one of the first and most common materials used in 3D printing.

“One of the reasons that we were needing to get another 3D printer is because we were literally running the Stratasys 24/7,” Howell says. “It never, ever stopped.”

On Friday afternoons, the team would set a build plate for a 60-hour print, then come in on Monday morning to pick up the finished part.

But as orders were increasing, and the team kept building new products that would require 3D-printed parts, the existing printer started to require more maintenance. Aware that if the machine went down, replacement parts may not be available right away, Howell and his team knew it was time to get another printer.

In 2019, Howell decided to research the marketplace to see what was out there seven years after the initial purchase.

Technology had indeed come a long way – Markforged, known in the industry for its ability to print with carbon fibre, offered a 3D printing solution that piqued Howell’s interest for the potential integration of robotics.

Markforged’s printing material is touted as having such a high strength-to-weight ratio and the machine itself such tight tolerances that end effectors for collaborative robots can actually be 3D printed.

As Sure Grip plans to implement robotics over the next couple of years, Howell sees this as an opportunity for workholding applications.

“We can take the things that we’re doing right now and get higher quality. That justifies some of the investment in terms of adding capacity, adding quality to what we’re already doing,” Howell says of the decision to upgrade Sure Grip’s printer.

“Then on top of that, [we’d have] a machine that we might be able to improve our manufacturing abilities and decrease our R&D costs on bringing new things online. That’s what was very interesting to me.” 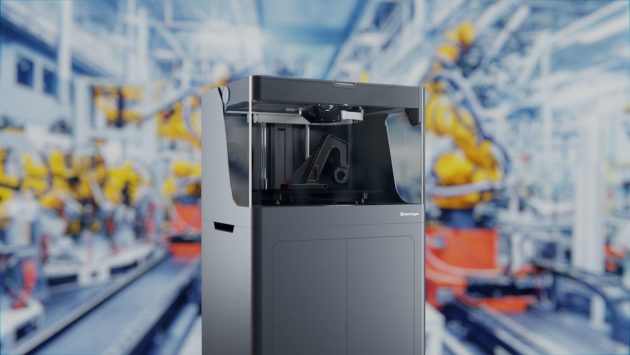 The Markforged X7 printer includes the option to add continuous fibre reinforcement, such as fibreglass or Kevlar, to parts. Photo: Markforged

Ultimately, Howell settled on the Markforged X7 industrial printer, which contains an auto-calibration feature that ensures it is ready to print whenever needed, and the option to print with continuous fibre reinforcement.

“We’ve invented a process technique whereby while we lay down the plastic, we’re actually embedding a continuous piece of fibre along a path. And we can build those paths up layer by layer,” says Michael Papish, vice-president, marketing at Markforged.

“If you think about the way that you put rebar into concrete to make what is otherwise a structureless object into a much stronger and organized reinforcement, that’s exactly what we’re doing with the printing of plastic.”

Markforged’s base material is called Onyx, a micro carbon fibre–filled nylon that has a high strength property to make parts durable.

The printers are equipped with a secondary nozzle that allows for the optional continuous reinforcement material – fibreglass, Kevlar or carbon fibre – to be printed simultaneously and inlaid into Onyx as it melts.

Sure Grip is using the standard Onyx material in many applications, such as in its flagship product the RF mini, a remote spinner knob that controls secondary vehicle functions for drivers who don’t have use of two hands.

Howell notes the matte finish of Onyx doesn’t reflect light as much as ABS does, which makes the visual quality of the final product that much better. Sure Grip is also experimenting with the fibreglass material on a few parts.

“We can take the things that we’re doing right now and get higher quality. That justifies some of the investment in terms of adding capacity, adding quality to what we’re already doing.”

“Often in our industry, we think about things like part strength, durability, toughness, but in this case, feel is also important,” says Papish.

“Because this is a part that a human touches and uses, it needs to be customized to that person. A traditional injection moulding approach is good at making a large volume of very standardized parts at a low cost.

“In this case, it would actually be quite expensive to use that manufacturing technique, because you’d be making a large number of customized parts. The mould would need to be changed, or you’d need to come up with some mechanism to mould the base unit, and then come up with ways of attaching those customization pieces.

“When you 3D print it, you can print each one custom, so each one can be tailored to the user. And that gives you much more flexibility.” 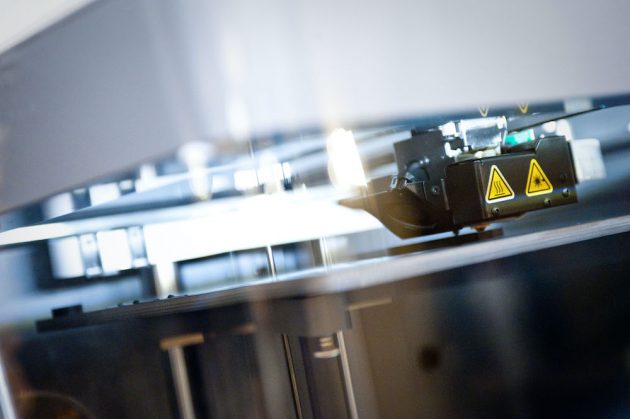 A close up of the Markforged X7 printer. Photo: Markforged

Aside from the production of parts, one of the biggest benefits of 3D printing for Sure Grip has been rapid prototyping, says Howell.

The company is able to iterate and test designs on the Markforged printer quickly. “Our process of creating and launching products has become so much more dynamic because we can actually have something to sell within days,” he says.

Rapid testing has led to better manufacturing outcomes as well. “If it doesn’t work or we want to change the position of the clamp, or we want to orient it in a different way, you hit print and show up the next morning and it’s ready – versus having to go back, change it all in CAD, reprogram it CAM, get another piece of steel, face it off and then mill it, which can be a multi-day process,” Howell says.

“Now, the jig is being built when we’re all home in bed.”

Sure Grip is using the X7 to print the prototypes for their own tooling, too, such as CNC milling jigs and dies that bend eight- to 10-gauge plate. This way, they don’t need to use their wire EDM to make prototypes out of steel, helping to save on costs.

The X7’s turbo printing feature, which allows for parts to be produced at a faster rate but at a lower resolution, is available if there are internal parts that won’t be seen or handled by Sure Grip’s end customer.

In 3D printing, the lower the number of microns of layer height, the higher the resolution of the finished piece. Sure Grip is now printing its parts at 125 microns to provide an acceptable visual quality for its products.

With Markforged’s dashboard, operators can constantly monitor the utilization rate of the X7 and get a notification when the rate is high enough that they should consider buying an additional unit to increase throughput.

As Sure Grip’s de facto leader – Howell’s father, who started the company, has stepped back recently to focus on his health – Howell says he is looking to the future.

Right now, in addition to the 3D printers, the company has some traditional automation in place including two CNC mills, a Takisawa 4000YS CNC lathe, a waterjet table, a wire EDM and a sinker EDM.

But Howell has identified dozens of processes that could be partially or fully automated, including sanding, finishing, deburring, machine tending, welding and assembly, which he expects will be possible with collaborative robots (cobots).

He’s also keen to onshore as much of Sure Grip’s production as possible, both in response to the coronavirus crisis and a certain made-in-Canada pride. The company already sources most of its circuit boards locally, as well as its plastics.

“I don’t want us to be a nation or a society that just outsources everything. I think that we need to make things. That’s really important.”

Howell expects that installing cobots will help the company to stop relying on less-expensive labour in China, and to save on some costs precipitated by the COVID-19 lockdowns. Before March, Sure Grip employed 39 people. Now they’re at 33 – but at their lowest point on March 31, they were down to 12.

As they ramp back up to full production, Howell says he plans not to hire back a couple of people and implement robots instead.

“[Our] three-to-five-year plan is to basically integrate robotics in everything that we’re currently doing, and then use the savings of time and energy, and the increased utilization of space – because we’re going to be able to run them overnight unattended – to reshore as much of our production as we can,” Howell says.

“I don’t want us to be a nation or a society that just outsources everything. I think that we need to make things. That’s really important.”

Getting the job done

Howell says that the power to iteratively design products on the fly is what has strengthened Sure Grip’s business model in a niche market. Customers send requests for one-off products that the team will realize are suitable for a wider audience.

“Now as the orders come in, we’re able to 3D print them and improve them incrementally as we’re going along, but we’re still getting revenue coming in,” he says.

This model decreases the need for market research, trial units, feedback and all of the other traditional steps that go into making a product.

“It’s been really neat that way. We’ve been able to help a lot of people. People are out there driving comfortably and they’re driving safely because we had a 3D printer.

“If we didn’t have that piece of technology, with conventional manufacturing methods we just wouldn’t have been able to get the job done.”

This article originally appeared in the October 2020 issue of Manufacturing AUTOMATION. Read the digital edition. It was posted on Oct. 15, 2020 and updated on Oct. 20.