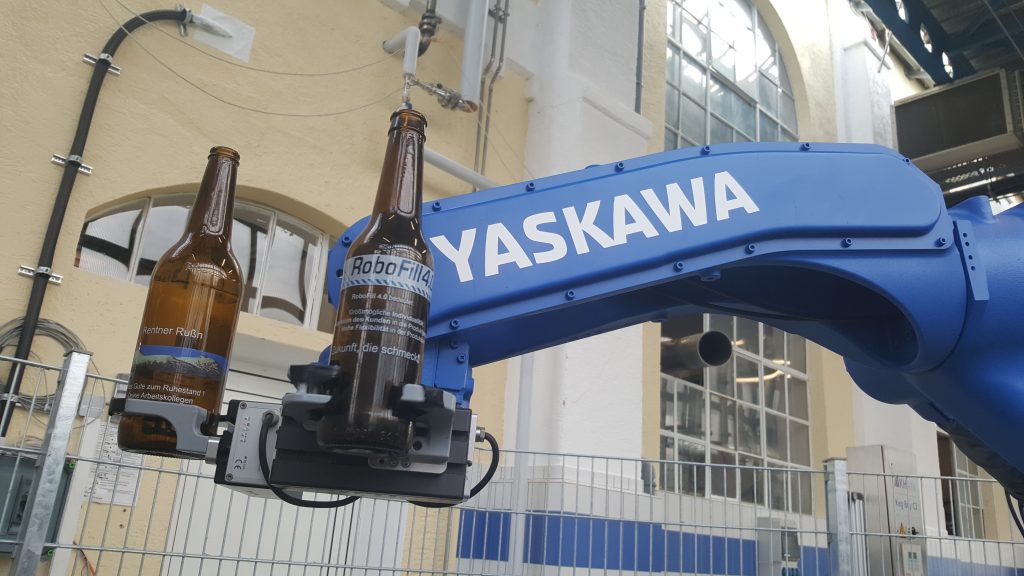 The trend toward customization and personalization of mass products is showing no signs of slowing down. In addition to the automotive and pharmaceutical industries, this trend is gaining traction in food production.

One of the primary challenges of this development with respect to personalized production currently lies in the fact that the consumer world is so closely connected to the world of production. At this point in time, general production has yet to be designed so that it can ensure the requested flexibility in volume and format in a way that is economical and sustainable.

There are already some personalized foods (e.g. Coca-Cola’s name-branded cans, etc.) on the market. However, primarily in the beverage industry, the production and process control structures that companies have been using are rapidly exhausting their potential.

Wide-ranging possibilities are emerging as part of Industry 4.0 for producing individualized mass products in the future that are both highly customizable while remaining profitable. This problem brought together academia and industry in a new robotic test concept.

Professors in brewing and beverage technology and food packaging technology from the Technical University of Munich partnered with German production research firm Fraunhofer IGCV and industry partners Krones, Beckhoff Automation, ProLeiT, Siemens, Dekron, Yaskawa Europe, Weihenstephan brewery and Infoteam Software. All parties worked alongside each other to come up with an innovative automation concept for individualization.

RoboFill 4.0, as the project has been dubbed, is a concept for filling and beverage technology that makes it easy to add more production modules. The purpose of this concept is the industrial supply of customized beverage bottles or packages. The focus is on having lot sizes in small batches down to even single units. According to project specifications, all plant components were to be configured as cyber-physical system components.

This is a core principle of Industry 4.0. The idea is that the components use network and cloud technologies to communicate continuously with each other and with higher-level systems. This makes it possible to achieve autonomous production control, while also laying the foundation for using numerous optimization processes in production technology (e.g. predictive maintenance).

When the gripper specialists from Germany-based Zimmer Group were asked to take part in the project, they faced some challenges. Developing the right gripper for handling various glass bottles and with robots turned out to be highly complex and costly.

Putting everything into practice meant that concepts from different areas were interconnected and all had to be taken into account, including force-controlled gripping, sealed components, using exclusively food-safe materials and lubricants (NSF-H1) and ensuring the grippers communicated with the robot control system.

Furthermore, it had to be ensured that the gripper handling the glasses would not break any, especially in the case of an emergency stop or power outage. The Zimmer Group development team also had to develop special gripper fingers, which were intended to handle any potential type of bottle from 0.33L up to 0.75L by gripping the neck and body of the bottle.

There was only one electrical gripper from Zimmer Group’s latest generation of products, the GEH6000 series with servo drive, that was suitable for this application. The problem was that this gripper was only available as a prototype at the time and it had not been designed for many of the requirements previously mentioned.

When the gripper specialists from Germany-based Zimmer Group were asked to take part in the project, they faced some challenges. Developing the right gripper for handling various glass bottles and with robots turned out to be highly complex and costly.

It is very complex to seal such a compactly designed electrical long-stroke gripper in such a way that it can be cleaned with a spray of soapy water, or to make sure that a bottle bursting will not lead to a system failure due to a short circuit.

Several development loops had to be carried out. In these loops, Zimmer Group took the knowledge gained in elaborate tests and applied it to the component geometry and the process for coating the components, as well as to the materials used for the various installed seals and wipers.

“By implementing the Zimmer HMI into the robot control system, many industrial robots now feature the option to control as many as four electrically or pneumatically driven Zimmer grippers,” says Erik Bauhaus, project coordinator and developer M-TB at Zimmer Group.

To keep development time and costs for the gripper fingers as low as possible, they were designed in advance using FE analyses and then additively manufactured in a 3D printing process.

A similar approach was taken in developing the bottle carrier for the Beckhoff XTS system. Employees drew upon their extensive experience with using food-grade lubricants. The in-house prototype creation and the option to start carrying out complex tests as early as the R&D stages were both significant factors in ensuring this project succeeded.

By the end of the project, the test system was being commissioned at Germany’s Weihenstephan brewery and is being tested extensively over the next few years for market-readiness and suitability for everyday use.