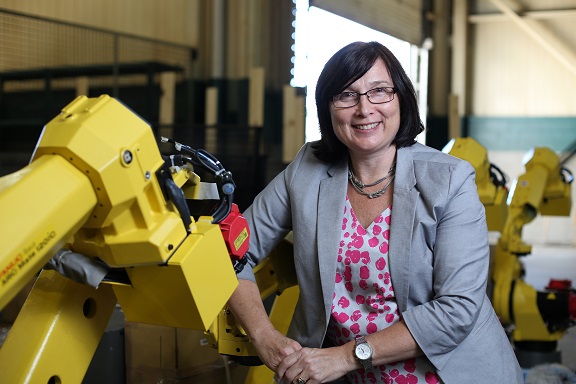 Shelley Fellows, chair of Automate Canada, is part of a group petitioning the federal government to allow manufacturing suppliers to cross the border amid COVID-19 restrictions. Photo: Automate Canada

On Mar. 19, the Windsor-Essex Border Task Force, represented by the Canadian Association of Mold Makers (CAMM), the Canadian Tooling & Machining Association (CTMA) and Automate Canada, along with the support of Chris Lewis, MP for Essex, presented a petition to the Canadian government’s Special Committee on the Economic Relationship between Canada and the United States.

They’re calling for the supply chain’s provincial status as essential to the manufacturing industry to be recognized federally so work can continue across the border. The petition is signed by thousands of professionals and business owners with U.S. work visas in the Windsor-Essex region who generate over $1 billion in U.S. exports to Canada’s annual GDP.

The task force – which represents manufacturing OEMs and supply chains as well as two major advanced manufacturing clusters – has also filed another petition online to the minister of public safety and emergency preparedness, asking for exemptions from quarantine for essential workers who receive negative rapid test results or who are vaccinated against COVID-19, and who agree to self-monitor.

Border restrictions barring travel between Canada and the U.S. have been in place since Mar. 21, 2020 to stop the spread of COVID-19, and now, only some “essential workers” are able to cross without a mandatory two-week quarantine. Currently, workers employed by suppliers in the manufacturing value chain must quarantine for two weeks upon entry back into Canada.

They’re also routinely denied access to cross, depending on how border officials interpret the rules of a federal legal order called the Orders in Council, which contains ambiguous wording indicating that manufacturing and industrial automation workers may only cross the border without quarantining if their “regular” employment is based in the U.S.

“This is interpreted to mean that they must cross the border at least weekly in order to be considered ‘regular’ workers. While the understanding is that Canadian workers must cross into the U.S. to take care of U.S. manufacturing customers, frequency is dictated by the requirements of a contract, not a calendar,” Fellows says.

“The same goes for workers for U.S. manufacturers who come into Canada to discuss designs, inspect equipment or get training on software.”

Fellows says the restrictions are creating a trade barrier – and when U.S. manufacturers can’t access the equipment and software support they have been relying on, they are turning to U.S.-based suppliers instead, leaving Canadian companies behind.

The tool, die, mold, and gauging and automation manufacturers represented by the task force contribute to a combined Canadian manufacturing GDP of $30.8 billion and provide 188,000 jobs in manufacturing (OEMs and supply chains) – but over 80 per cent of their goods are exported to the U.S.

“This means the gradual erosion of our domestic industrial automation sector. When projects in the millions of dollars are lost to U.S. companies, Canadian companies must cut back and rethink their business strategies,” Fellows says.

“It really is heartbreaking to hear their stories and to know that the big picture is the eventual decline of our highly valued and innovative manufacturing technology sector.”

In January, Automate Canada, CAMM, CTMA and the Niagara Industrial Association released the results of a survey of their members stating that manufacturers are losing millions of dollars in lost contracts.

Survey participants said the restrictions have led to increased costs in order to accommodate government-mandated quarantines and unavailability of key personnel. They’ve also led to loss of revenue, loss of customer relationships and reduced investments in new technology.

“Our members are desperately working to not only assist suppliers and clients later in the supply chain but we have also stepped up to help when medical items were needed,” says Rob Cattle, executive director of CTMA, in a statement.

“There seems to be some crossed wires and we respectfully ask for our government to step up to help these essential workers.”

Jonathon Azzopardi, chair of CAMM, concurs. “We may be at the start of the supply chain but without us, the end products couldn’t be produced. We were deemed essential for a reason. So, to be blocked at the border and asked to quarantine for 14 days makes no sense. It isn’t reasonable or fair.”