A machine-builder achieves rapid time to market for custom assembly machines by standardizing on EtherCAT and PC-based automation. 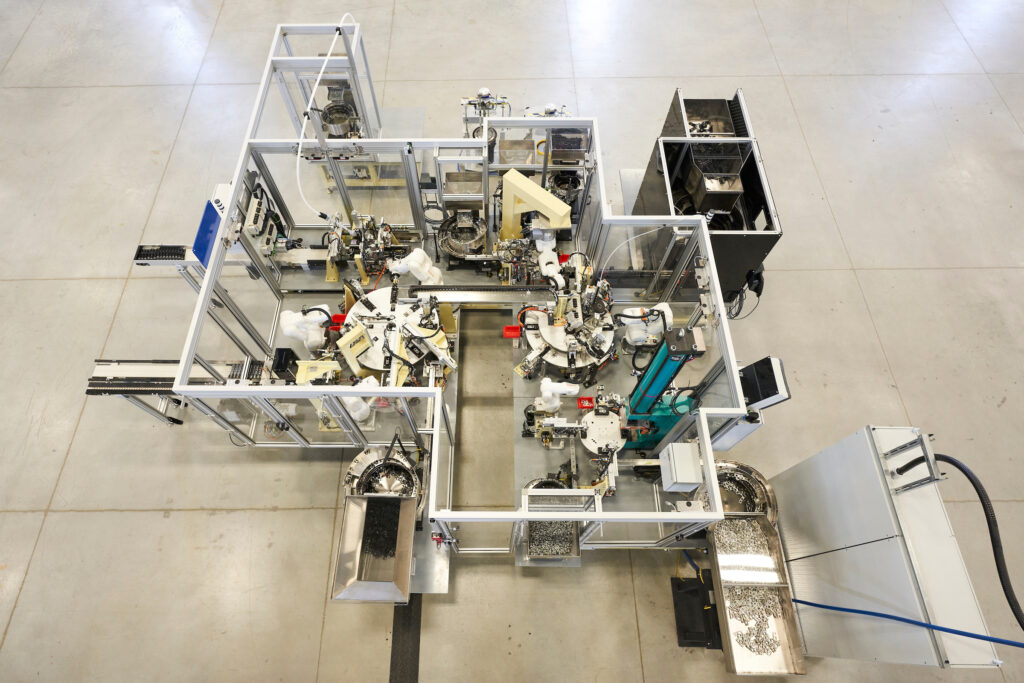 Sodecia shrunk the SBHA system’s footprint by roughly half, compared to the original design by another machine builder. (Photo: Beckhoff, 2022)

When building series machines in high volume, timeframes are straightforward. But one-off, custom applications can prove tricky, with many unknowns during design, development and commissioning. To help meet incredibly tight time to market, Sodecia’s Global Tech and Automation Center (GTAC) applies principles from series production to its custom machinery for the notoriously demanding automotive industry. For years, the London, Ontario-based machine builder has invested time and resources in creating standardized control architectures and modular, reusable code.

“Based on our control code, we turn around projects that would typically take eight months to a year in just three to four months,” says Chris Drees, controls engineer at Sodecia GTAC. “This also means any of our engineers can easily troubleshoot code for standard or custom machines.”

The machine builder’s skill and agility quickly garnered global attention. In 2012, Sodecia acquired an automation group as part of a larger company buyout. This automation group formed the base for what is now Sodecia GTAC, an automation division under the Sodecia umbrella. Sodecia adopted many of the automation group’s time-saving innovations into its own global standards, across the company’s nearly 40 manufacturing facilities around the world. These developments, which GTAC has continued to advance, have enhanced and accelerated design, programming and commissioning for Sodecia’s automated assembly and welding solutions for the automotive market. However, the benefits were critical when the Canadian engineers received an order from a global automotive manufacturer for a new version of a Seat Belt Height Adjuster (SBHA#3) in 2021.

Beyond faster throughput, the SBHA#3 machine presented some unique technical demands, according to Jessy Underhill, PLC and robot technician at Sodecia GTAC. “Compared to welding machines with large robots, the Seat Belt Height Adjuster features faster-paced assembly processes in a smaller footprint,” Underhill says. “But we adapted our standard code structure – for things like dial table logic with the servo-based motion control and data transfer – to provide that functionality.”

Minor speed bumps on the road to success

SBHA#3 features five sections. Two substations assemble the button for activating the seat belt adjustment – essentially a small actuator with a spring. Next, the assembly is inserted into the component that slides up and down a steel rail, which has a small steel plate with a nut. The fourth section installs that assembly into the rail, which will ultimately be mounted to the vehicle chassis. The last section is quality assurance, so it performs height and load measurements on the components to ensure the button will actuate correctly. To accomplish this, the system features two servo drives powering four servomotors, two machine vision cameras, five VFDs, six KUKA robots, 13 solenoid valve banks and more than 100 I/O terminals. Therefore, real-time control and communication was key.

The automotive manufacturer needed SBHA#3 to increase the throughput of the current system, which presented new challenges even though the GTAC engineers had already optimized the existing machine in the past. The original assembly line, designed by an overseas OEM, had multiple separate cells and external conveyance equipment to transport workpieces between them. When Sodecia first redesigned this for the automotive manufacturer, the GTAC engineers cut the machine footprint nearly in half to a roughly 20-by-20-foot enclosure.

“The two previous iterations produced a part every 5.4 seconds, but this one needed to reduce that to 5.1 seconds,” Drees explains. “We also wanted to boost uptime, OEE and other capabilities, while expanding functionality by leveraging some recent updates to our standard code.”

As always, the project required a tight production schedule. It’s a competitive advantage that was born out of necessity, according to Brent Lekx-Toniolo, one of the founders of the original automation group who now works as an R&D contractor for Sodecia. “We designed the concept of building a framework around 2000 because customers ordered machines with very quick time-to-market requirements,” Lekx-Toniolo says. In 2007, GTAC discovered Beckhoff Automation, which offered the industrial control and networking technology to make the framework a reality. “After so much trial and error with other control platforms, Beckhoff truly was the solution we had been waiting for,” he adds. “Ever since then, we’ve been a Beckhoff house.” 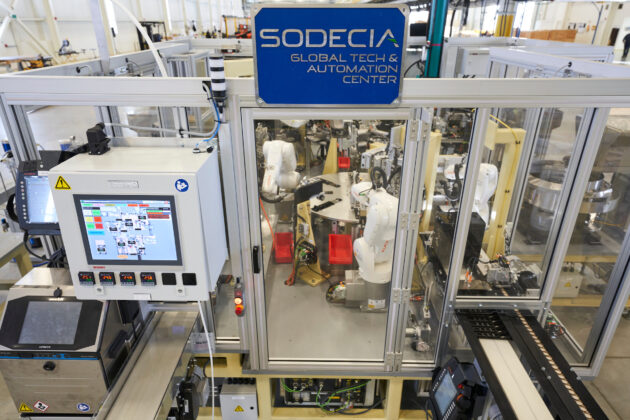 SBHA#3 relied on PC-based automation to meet the new challenges. This approach uses a flexible, universal engineering and runtime platform, TwinCAT 3 automation software, to control all machine processes from PLC and robotic kinematics to functional safety and IoT. A model of openness, other software can run alongside TwinCAT on the PC-based machine controller. The TwinCAT engineering environment is fully integrated into Microsoft Visual Studio and supports programming in the object-oriented extensions of IEC 61131-3, predefined and custom function blocks and computer science languages. This allows the GTAC engineers to program in the languages they are most comfortable with or that best suits the application at hand.

The TwinCAT runtime is on GTAC’s standard control hardware, a CP2215 Panel PC from Beckhoff. This device serves as both a machine controller and user interface (UI). The 15-inch touchscreen features a rugged aluminum housing and five-finger multitouch functionality. This allows GTAC to design intuitive UI screens for operation, diagnostics and troubleshooting. “We have failed our customers if they have to get online with the PLC code for troubleshooting,” Lekx-Toniolo explains. “In our mind, we need to build a UI that is so robust that they can handle all troubleshooting from the UI and only need to go deeper if they want to make modifications or add on functionality.”

The GTAC engineers see robust diagnostics as another major benefit of EtherCAT. These diagnostics, combined with the intuitive UI, allow the Sodecia machines to display a cable break, faulty connection or other rare faults graphically for quick correction.

With interfaces to over 30 prominent fieldbuses and communication protocols, EtherCAT simplified integration of the two machine vision cameras, which connect via EtherNet/IP, with the simple addition of an EK9500 Bus Coupler. This, along with a variety of EtherCAT I/O terminals in DIN-rail-mountable IP20 or machine-mountable IP67 form factors, delivered the right solution for each unique requirement. “The broad Beckhoff I/O portfolio gives us the most modular, customizable system based on the requirements for our machine fixturing and components,” Drees adds.

The GTAC engineers achieved great results with SBHA#3. Sodecia made key updates to its code base with TwinCAT automation software. SBHA#3 met the 5.1-seconds-per-part throughput rate, with the EtherCAT-enabled machine controller running at 125 µs scan rate. The project met a tight timeline – starting in September 2021, with commissioning in March 2022.

Sodecia worked closely with the local team from Beckhoff Canada during the project.  Going forward, the automation experts at GTAC hope to leverage more Beckhoff technologies. The team plans to standardize on TwinCAT HMI software, a flexible, responsive HTML5-based solution for modern UI. Building on this firm foundation in rapid machine design and delivery, Sodecia continues to innovate at full speed.

James Figy is a senior content specialist at Beckhoff Automation.

Related
Five steps to plan and pay for automation: Automate to Innovate event recap
Sept. 28! Join us for the Future of Automation: 2022 Technology Forum!
How will COVID-19 impact the manufacturing automation market?
Keeping the lights on: Pandemic underscores need for cloud-based systems
Tags