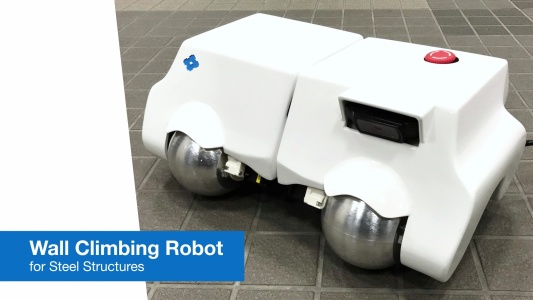 Sumitomo Heavy Industries developed a robot capable of climbing curved steel walls by magnetic adhesion. The achievement is part of a robot development project at the company’s Technology Research Center.

The novel robot was designed to automate various manufacturing tasks at industrial sites, according to the company. The development was achieved under Challenge Program launched in FY2018.

The company explained in a release that wheeled robots with magnetic adhesion are well known in manufacturing and maintenance of large steel structures like ships and industrial facilities. Most conventional wall climbing robots are designed for flat surfaces. To adapt such robots to curved surfaces, it is necessary to either make the robot smaller than the curvature of the surface or design the robot to fit a particular surface shape and travelling direction, explained Sumitomo. This means that these robots are limited in the range of surfaces they can travel on, the tasks they can perform, and the types of tools they can mount.

Sumitomo invented a novel spherical wheel containing a magnet that can be rotated around two axes. Using this design, the company developed a robot that can adapt and travel over curved surfaces that were not possible with conventional robots. In addition to travelling over curved walls, the new robot can also attach and detach from walls by changing the magnetic force direction and climb over corners without the need of any complicated controls.

In manufacturing of large steel structures, the newly developed robot can be used for tasks such as welding at heights and on curved surfaces, says Sumitomo. The company says that the robot is expected to reduce the physical burden on workers, thereby creating safer and smarter next-generation manufacturing sites.