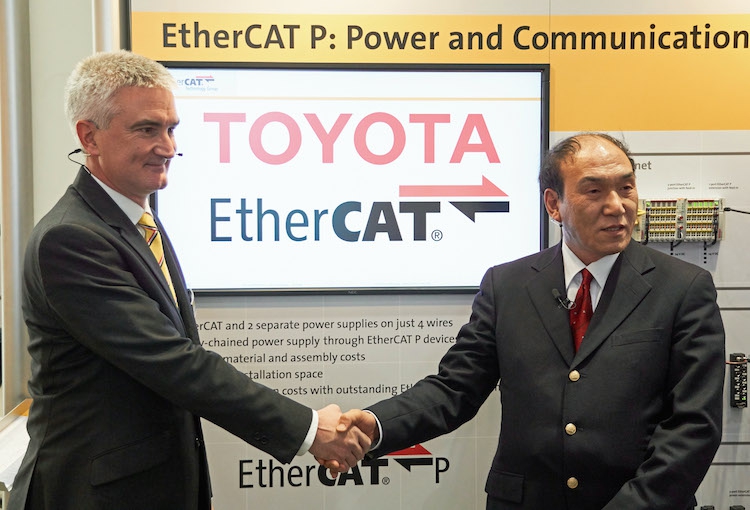 May 13, 2016 – Toyota Motor Corp. has selected EtherCAT as its industrial Ethernet technology of choice and will base its new factories around the world on EtherCAT. The global announcement was made by Morihiko Ohkura, general manager of the Production Engineering Innovation Division at Toyota Motor Corporation during an EtherCAT Technology Group (ETG) press briefing at Hannover Messe 2016.

“I am pleased to announce that Toyota Motor Corporation will make the most of EtherCAT in our new factories to be built around the world. We have conducted thorough analysis and evaluation to compare various industrial Ethernet technologies,” said Ohkura. “I believe the performance, determinism and simple wiring characteristics of EtherCAT, in addition to its openness, best fit with the needs of Toyota to evolve production systems with Industrial IoT concepts.”

EtherCAT is also an essential part of Toyota’s new IoT deployment strategy, says the automaker. “In order to smoothly introduce the new IoT concept to our factories, it is critical for us to be able to source necessary EtherCAT components in a timely manner. Thus, we strongly encourage our suppliers to prepare high-quality EtherCAT components with competitive cost. In March 2016, I made such an announcement in Japan to inform local suppliers and I would like to take this opportunity at Hannover Messe to communicate our plan to our suppliers around the world,” he noted.

Furthermore, Ohkura stressed that Toyota is prepared to take an active role within the EtherCAT Technology Group (ETG). “What I expect from the ETG is to support us in becoming one of the leading EtherCAT users in the industry. By growing the community of supporters of EtherCAT technology, I am confident that the transition from our current technology should be a smooth one,” said Ohkura.

The decision to standardize on EtherCAT also factors in the latest addition to the technology, EtherCAT P. “I should also mention our strong interest in the new technology, EtherCAT P. The concept to integrate communication and power lines perfectly matches our lean production philosophy, TPS: the Toyota Production System. Simply put, the fewer cables, the better. While still in preparation to become an ETG specification, Toyota is prepared to actively collaborate with Beckhoff Automation, the inventor of EtherCAT and EtherCAT P, in order to smoothly make the new technology available to us and the rest of the community,” he noted.

Martin Rostan, executive director of the ETG, said, “The significance of Toyota’s choice to standardize on EtherCAT and EtherCAT P cannot be overstated. As the world’s largest automotive company, Toyota is known for its highly efficient  and high-quality production strategies, with many companies and industries following the successful path set by this manufacturing leader. This significant development will further accelerate the global adoption of EtherCAT within the automotive industry and beyond.”

Rostan also welcomes the active involvement of Toyota in the EtherCAT Community: “The EtherCAT Technology Group has always been characterized by active user involvement. Having Toyota on board will strengthen this vital element of engagement and ensure that user requirements are fully met or exceeded by EtherCAT technologies. In addition, the specification work for EtherCAT P, our latest enhancement of the technology, is in full swing, so the timing is simply perfect. I encourage the many other car makers already using EtherCAT in major manufacturing applications to join Toyota in taking such an active role within the ETG.”