What does Time-Sensitive Networking (TSN) mean for decision-makers in the IIoT? 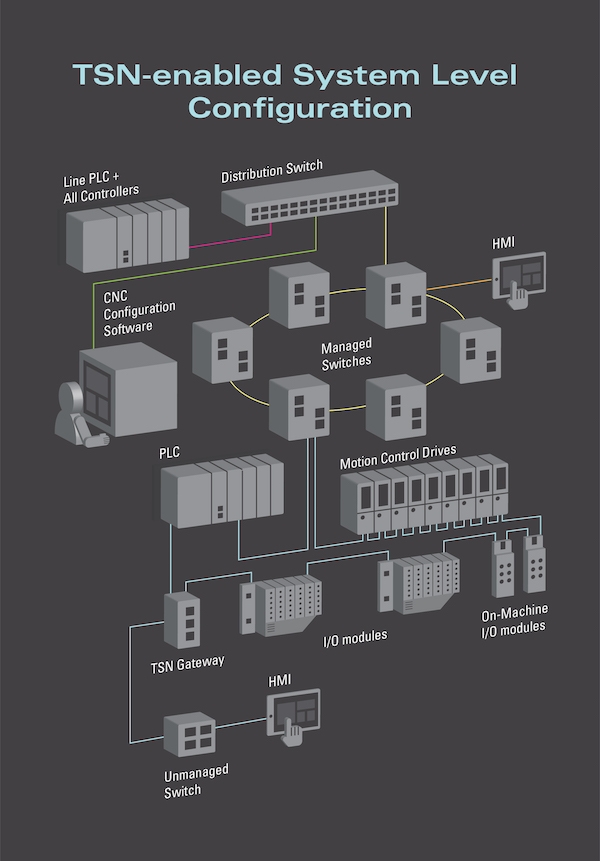 July 15, 2019 – The Industrial Internet of Things (IIoT) is one of the biggest business opportunities of the 21st century, and recent market reports and projections see the industrial automation equipment market as a central focus for that growth.

In the industrial market, evolution of the IIoT will increase the amount of data harvested through distributed networks, requiring new standards for managing and transferring critical and non-critical information. This new paradigm also increases the demand for higher levels of reliability and security than what is provided by the numerous focused and isolated industrial communications standards that exist today – the latest set of IEEE 802.1 Time-Sensitive Networking (TSN) standards represent the next evolution of standard Ethernet technologies that are targeted to meet the new demands of the IIoT market.

How does TSN assist control applications?
Control applications in industrial settings require consistent and deterministic delivery of data for every part of the network – from sensors to controllers and more. This data is critical to the manufacturing process and it is imperative that interference or hindrance of this exchange is minimized, which has historically not been problematic for most automation systems due to control data being physically segmented from information data over separate networks.

But as the IIoT becomes part of manufacturing processes, key decision-makers are looking to glean insights and analytical information from the same sensors and devices that are also controlling the process.

TSN is one way to ensure that this control data traffic is delivered in a timely manner by securing bandwidth in the network infrastructure, while simultaneously allowing non-critical forms of data traffic to coexist on the same network. TSN provides the tools to enable the convergence of different data traffic on the same physical network, reducing the infrastructure cost. TSN standards define new functions for Ethernet networking such as traffic shaping, frame pre-emption, traffic scheduling, ingress policing, and seamless redundancy.

When all parts of a network are running with the same sense of time, traffic can be coordinated based on a schedule, one method that allows for better control of critical traffic. TSN makes it possible to run the calculations that can help the implementer predict if a network design will be successful for a given application.

TSN enables the convergence of networks and systems that were previously kept separate for reasons of operational integrity, real-time performance, safety or security. With TSN and time synchronization, insights from real-time data at the edge arrive on time from anywhere, no matter how demanding the environment. For businesses in the industrial market, TSN and its accompanying smart software offers the ability for a smart system to configure the network infrastructure. Choosing TSN can change the industrial model for a more converged and deterministic network built on platforms to protect investments long term.

What are the business benefits of TSN?
The industrial market currently requires two types of networking professionals: informational technology (IT) and operational technology (OT), who are often required to manage and configure network infrastructure and control system parameters. Now, with TSN and its potential for smart software, there is an ability for the smart system to configure the network infrastructure. With TSN’s intelligence in the network, it becomes more automated and less dependent on human intervention, reducing the possibility for subsequent error.

Investment in intelligent systems and devices capable of participating in a wider, self-configuring ecosystem allows for flexibility in cost structure. Software Defined Networking (SDN) type tools can enable system-level configuration software, as well as diagnostic and monitoring tools. These new mechanisms would allow the end user to finally manage the network from the manufacturing floor to the business systems.

Today, technicians have to configure each network device manually on conventional networks, but TSN can allow for automatic configuration via intelligent configuration tools. Standardized methods for network-wide configuration and commissioning required by TSN also creates the avenue for offline simulation and modeling of the network and the architecture.

Implementing TSN allows for the convergence of different traffic classes on a single network and may reduce overall system costs significantly. Because TSN is part of the Ethernet family, it naturally scales with Ethernet, meaning that the technology will not be limited in terms of bandwidth and other performance criteria, and new nodes can easily be added to the network and discovered via standard networking protocols.

Security is also a critical pillar for industrial automation and control networks. Because TSN is standard Ethernet, control networks can take advantage of best practices for security that have been developed into Ethernet for decades. TSN also adds a layer of security to the data with the precise timing mechanism that facilitates early detection of a network breach.

Other business-level benefits of TSN for industrial systems include the possibility of shorter operational lead times, more visibility over systems and more efficient asset use.

TSN is the platform on which tomorrow’s networks will be built: Choosing TSN can change the industrial model for a more converged and deterministic network built on platforms to protect investments long-term.
_____