Toyota Motor Manufacturing Canada Inc. will add a second shift to build more RAV4s at its Woodstock, Ont.-based facility in March 2010. TMMC, which also builds the Corolla, Matrix, and the Lexus RX350, will add more than 800 jobs and increase RAV4 production to 150,000 vehicles. Hiring begins this month.

Production of the RAV4 SUV began in November 2008 with one-shift and 1,200 team members. Toyota will now build the majority of RAV4s for the North American market in Ontario. 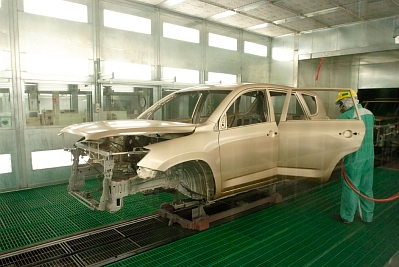 "Thanks to the high demand for this popular vehicle, we are able to increase production in Woodstock," said Ray Tanguay, president of TMMC. "We are very pleased to be able to continue our growth and provide jobs in the local community. This is a vote of confidence in the RAV4 product, the quality of our suppliers and the capability of our Canadian Team Members. In addition, this move demonstrates Toyota’s continued commitment to North American production and to building where we sell."

In an interview with The Globe and Mail, he goes on to say that this move "reinforces that our parent company in Japan is very confident that Ontario is a great place to build cars. … I think a lot of people started to question whether Canada is a good place to invest. We’re sending a strong message that Toyota is very committed to making cars here in southwestern Ontario.”

The RAV4 is one of only two vehicles in Toyota’s portfolio in the U.S. market that has posted a sales gain this year, up 3 percent compared with the same period last year.

The additional 800 jobs will boost the total TMMC employment to approximately 6,500. TMMC has manufactured vehicles since November 1988 and has the capacity to build 420,000 units annually.
www.tmmc.ca