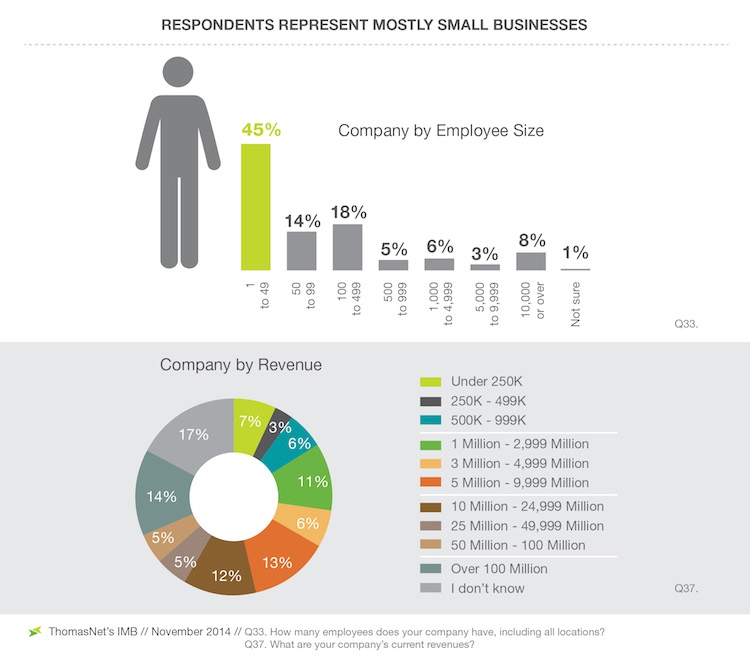 Dec. 8, 2014 – The latest ThomasNet Industry Market Barometer (IMB) shows the North American manufacturing sector is on an upward trajectory, but finds a shortage of young talent, compounded by baby boomers’ negative perceptions about millennials, could impact its continued expansion.

The annual survey of 500 manufacturers in Canada (5 per cent of total) and the U.S. noted continued growth for the sector, as companies are hiring, increasing production capacity, and investing for more growth to come. About 58 per cent grew in 2013 and 63 per cent expect even more gains by the end of 2014, stated the survey.

Nearly eight out of 10 (76 per cent) are now selling overseas, and one-third expect that business to increase. In anticipation of what’s ahead, they are investing in capital equipment, optimizing operations, upgrading their facilities, and retraining their people, it said. More than half (52 per cent) expect to add staff in the next several months, up from the 42 per cent who planned to hire last year. Respondents noted that their employers are looking for trained, experienced people — manufacturing/production management, line workers, skilled trade workers and engineers — to keep up with current and future demand.

“For the industry to sustain its steady climb, all the fundamentals need to be in place, and one of them is missing — a robust pipeline of talent,” said Mark Holst-Knudsen, ThomasNet president.

Last year’s IMB called attention to the “ticking biological clock” in manufacturing — the disruption that is coming as baby boomers leave the workforce without people primed to replace them, noted ThomasNet. About 38 per cent plan to retire in one to 10 years, and 65 per cent lack a succession plan. Moreover, 62 per cent of respondents said millennials represent a small fraction of their workforce, and 81 per cent have no explicit plans to increase those numbers.

On the other hand, some manufacturers said they are making headway in the area of apprenticeships, which provide opportunities to bring in entry-level employees and career changers. For businesses with applicable programs, 51 per cent now have them in place, and 23 per cent plan to do so.

“We need new talent everywhere — on the plant floor, in the field, and in management — and getting young people to look at manufacturing isn’t easy,” said Karen Norheim, executive vice president of American Crane. “To ensure our company’s success, our employees have become brand ambassadors for manufacturing. We’re bringing our children to our plants, looking at new internship programs, and reaching out to local colleges and trade schools. By making a local footprint, we’re helping to address a national problem.”

ThomasNet said this year’s data shows the manufacturing industry increasingly aligns with millennials’ value systems and technology expertise, as research demonstrates millennials have an opportunity to make a social impact working with sustainable and green technologies, solar energy, and wind power. In addition, respondents cited innovations in design and manufacturing software, automation/robotics, and 3D printing as intrinsic to today’s jobs.

According to Holst-Knudsen, the talent shortage is the elephant-in-the-room that could impede progress. “It will take the concerted effort of every manufacturer to reach across generational lines, and bring in the people who are critical to the industry’s continued success.”