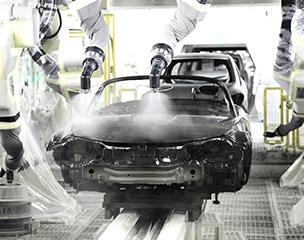 Apr. 21, 2016 – Mazda Motor Corp. is rolling out its Aqua-tech Paint System at its Changan Mazda Automobile (CMA) vehicle production facility in Jiangsu, China. Describing it as the “world’s lowest-impact water-based paint system,” the “unique” technology was first introduced at the Ujina Plant No. 1 in Japan, where installation of the system was completed in 2012. CMA becomes the company’s second plant and first overseas facility to feature the technology.

According to Mazda, the transition was achieved quickly and without stopping the line or interrupting production of vehicles using traditional oil-based paints. The system at CMA is used for all body colours, and the “quality of the finish is as high as that of vehicles painted in Japan, even for designer colours such as Soul Red,” it notes. What’s unique about the system, says Mazda, is its ability to simultaneously reduce volatile organic compounds (VOC) by 78 per cent compared to Mazda’s previous oil-based paint systems without increasing energy consumption (and associated CO2 emissions)

“As an automaker, we have an obligation to not only make high-quality cars, but also reduce our impact on the environment,” said Kiyotaka Shobuda, senior managing executive officer. “Our painting technologies, which have helped KODO design gain recognition worldwide, represent Mazda’s efforts to meet that obligation. Moving forward, we’ll continue to develop innovative technologies at our parent factories in Japan before introducing them at the same high standards overseas. In this way, we’ll provide customers around the world with high-quality cars and contribute both to preserving the environment and enriching society.”

The company says it is aiming to achieve “high-quality and efficient” vehicle manufacturing at its global production bases by developing technologies such as Aqua-tech in Japan before rolling them out at overseas facilities.