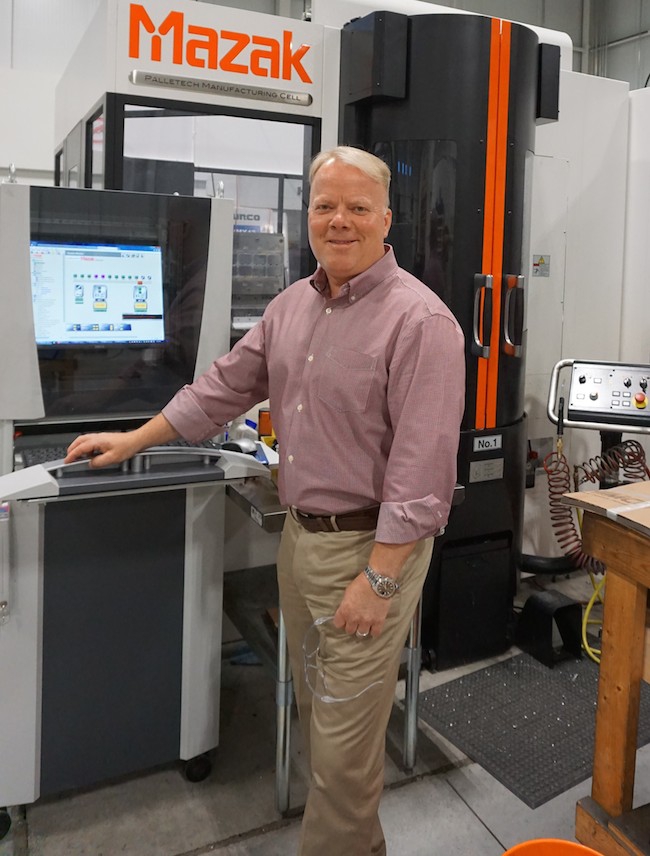 Jul. 15, 2016 – Cambridge, Ont., is the new home of Shimco, a 25-year-old shim manufacturer that recently moved from its original building in Markham. Peter Voss, president and CEO, shares with us how automation has greatly boosted the company’s success.

MA: What are some ways you have updated Shimco’s production?
PV: When Shimco was in Markham, it was more traditional — one operator, one machine kind of thing — we had a bunch of horizontal machining centres but at one operator, one job. After we moved to the new plant in Cambridge, I decided to put in a flexible manufacturing system. I purchased a Mazak 4000 HCN horizontal machining centre two years ago and a second one recently with a higher torque head, designed for hard metals, and also bought a PalleTech system, to join the two HCNs, forming a flexible manufacturing system. The system now holds 12 pallets and will run 32 jobs at once with one operator. It’s moving towards ‘lights out.’ I designed the plant here to be Lean, so production really depends on what the order is. We do some distribution of rebuying and selling of specialty metals, and when those orders come in, they don’t go more than 100 feet of the plant. They come in, get inspected and might be put away in the storage area but they don’t go into the plant. Then, they go back out again to get shipped. If the part requires no shearing and cutting, it goes into the shearing and cutting cell, goes to QA and goes back out again, another 25 ft., if it requires laminating, it goes another 25 ft., if it requires machining, it goes 50 ft., and so on. It’s a circular flow that minimizes the steps the part has to take. We do very little of this now — our focus is on long-term supply contracts for aerospace parts with aerospace OEMs and Tier 1s.

For the setup in the machining cell, the operator who loads/unloads the material can now also run two other vertical machining centres that are face to face and very close to the loading station. This means that when that PalleTech is running, he can go and run two other jobs on the verticals.

MA: How did you settle on Cambridge as the new location? How did the move go?
PV: Well, I live in Cambridge so I’ve been commuting from Cambridge to Markham everyday for about five years — a lot of kilometres, a lot of hours on the road. I was actually looking for something in the GTA (Greater Toronto Area). I looked for many months but the price of building in the GTA is astronomical, so I looked at other locations. We ended up saved about $1.5 million just in development charges alone by building in Cambridge, and the price of land was half. We had a very detailed move plan and we were operational in February. About 70 per cent of the people in Markham moved to Cambridge — a very high uptake — so it was really the same people, same equipment, and same processes. We gave a report to our top 20 customers and had monthly calls with them to let them how the move was progressing. We even had regular videos of the construction process they could look at. We’re going to add another 30,000 sq. ft. (2-storey – 15,000 sq. ft. per floor), where we will support our in-house processing capability on the main floor, and will also establish a Centre of Excellence with four local universities on the second floor.

MA: At a time when some plants struggle to keep their doors open, how do you stay competitive?
PV: It’s really through a lot of the automation. High-tech manufacturing is not about the actual processes, it’s about how you schedule, how you man the machines, that sort of thing. I’ve hired someone who will create information flow that allows us to look at capacity by person, by machine, by cell, and by part families, and when internal people are looking to prepare quotes, they’ll type it into the system and it’ll result in a date that incorporates details like material leadtime, subcontract leadtime, internal capacity issues, so all information is available to everyone at their fingertips. We have also eliminated paper. Right now, there’s only one ticket that goes with each bin and we have up to 1,000 work orders on the floor at one time. It used to be that when we had a change order, you’d have to go find that order on the floor and there would be a person running around looking for it. Now we are moving towards RFID tags in each bin, which allows us to locate any part on the floor instantly. It’s not a huge facility — about 23,000 sq. ft. for production — but that many bins on the floor is a challenge to find. We’re also moving to higher inventory control where a light will flash on the shelf, indicating the material you’re looking for is here and available. It’s about eliminating the waste in typical Lean concepts: eliminating touch time and paper, and taking away unnecessary decisions from the people actually doing the work. It’s also about looking at what you’re really good at, and not trying to be everything to everybody. When I bought the company, we were 65-per-cent aerospace and now we are 99-per-cent aerospace. We’ve gotten rid of all the other stuff, focused on aerospace, and have tripled our sales because of that focus.

Did you know Shimco has its own scholarship program? Last year’s inaugural award went to Carmen Bracho, a mechanical engineering and management student at McMaster University.

This profile was originally published in the June 2016 issue of Manufacturing AUTOMATION.