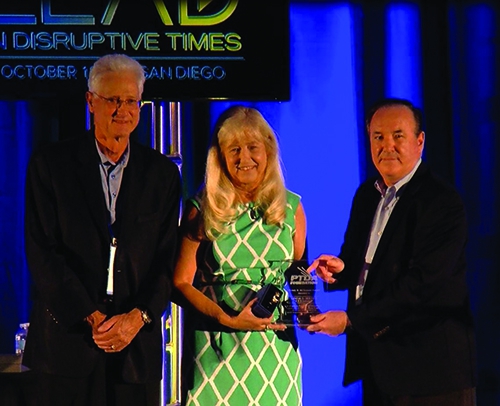 Oct. 31, 2016 – B & D Industrial’s Linda Miller has been named the 2016 recipient of the Wendy B. McDonald Award by the  Power Transmission Distributors Association (PTDA) Foundation.

In her acceptance speech during the PTDA 2016 Industry Summit in San Diego, Calif., Miller thanked many people in her life.

“I do love this industry. Without the people in this room, the world would not exist as we know it today. Nothing would be processed. Nothing would be manufactured. And, nothing would move. In my book, that’s pretty heavy, so I want to say thanks to each and every one of you for contributing to the lifestyle we’ve come to enjoy,” she said.

Her first job in the industry was at what was then Bearings & Drives in 1975, where she was “simply looking for a job” after moving from Jackson, Miss., to Macon, Ga. She had been referred to the company by a previous employer.

“From her first job as a clerk/typist, Miller began attending IBM training and was rewarded for her information technology skills by being named manager of information technologies in 1982. As Miller trained others on the new systems being installed, she also learned about the people she was training. It was a natural next step to name Miller as B&D’s first manager of human resources in 1996 (in addition to her IT responsibilities). Her contributions to the company in this dual role were recognized with her election to vice president later that same year,” noted the foundation.