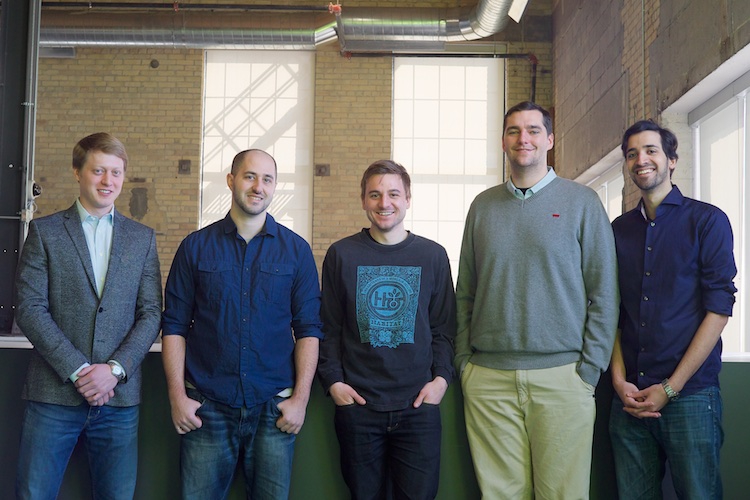 The MAJiK Systems team from left to right: Michael Tatham

Nov. 4, 2016 – What do you get when you combine the vision and talent of five University of Waterloo engineering grads with a passion to radically improve factory production? You get MAJiK, a real-time monitoring system for plant management to reach “previously unattainable levels,” that allows managers to adjust production schedules and act immediately on changes in important quality metrics.

“We created MAJiK Systems after working in manufacturing during our co-op work terms and dealing firsthand with the challenges of gathering data to better understand the production operations,” explains co-founder Michael Tatham. “There was no technology available that could connect to the wide variety of machine controllers and manufacturing information systems that was necessary to solve this problem.”

A need in the marketplace
It was five years ago that Tatham and his four other co-founders formed the company, with the name created with a letter from each of their first names. These days, Tatham manages sales, Adam Singer handles interface design, Jared Evans spearheads product management, Kamal Aman directs systems architecture and Benjamin Kiefer takes the lead with hardware and software connections. But when they started, they were all still in school.

The transition from students to startup mavens was gradual, which Tatham believes was a good thing. “When you are a student with a big idea, you have a lot of questions, but to see your idea through to being a successful company, you need to get to a place where you start having answers instead,” he says. “We are all U of Waterloo Engineering grads, so we started out really focused on the technology and with a passion for the problem we were solving, but we had a lot to learn about how to build that into a functioning and successful business. In a sense, once we finished school, we had to learn more new things faster than ever. Learning how to turn our challenges into business processes and becoming sales-oriented were essential to making it this far.”

As the five started translating their ideas into running a business, their roles gradually diverged and diversified. “As a close team with experience working together, we knew each other’s strengths and interests, so finding our own areas of specialization and how we could all help the company the most happened fairly naturally,” Tatham remembers. “It just took some time to learn all the new things we needed to be thinking about.”

In the early days, the biggest challenge was figuring out now to connect with the wide variety of existing factory setups and addressing a huge range of customers’ needs. “From the start, we identified and prioritized the leading technologies and customer needs and figured out how to work with them first,” says Tatham. “At the same time, we designed our system as a set of tools to make it easier for us to do all of the integrations and configurations involved in delivering customized solutions. The earlier days were heavily focused on getting our system to that level, and we are still finding and adding new protocols and capabilities all the time, but now it’s a lot easier and faster.”

The solution
Because MAJiK connects to a plant’s existing equipment and IT infrastructure, it doesn’t require a costly replacement of existing hardware or software packages — nor force a factory to conform to a single controls ecosystem, says Tatham. MAJiK is categorized as a Level 3 software, providing real-time connections between Level 4 business systems (such as Enterprise Resource Planning [ERP]) and Level 1 and 2 Automation Systems (such as machine and production line CNCs and PLCs, and Supervisory Control and Data Acquisition Systems [SCADA]). The company says the system is “very economical and quick to put in place,” the simplest transition available on the market to receiving all the benefits of a full Manufacturing Execution System (MES) within a factory.

Like other systems of its ilk, MAJiK is based on the well-established credo, What you cannot measure, you cannot act on. With the system in place, plant managers have access to data that had previously either not been collected or were difficult to collect — or data that were collected regularly but not in amounts that were meaningful or organized in a useful way, describes Tatham. End-users are able to calculate multiple machine performance metrics during plant operation, baseline and compare the performance of work centres, understand the factors behind equipment performance, and increase the efficiency of bottlenecks, he notes, adding that they are alerted if and when a line has fallen behind and can adjust the shipping schedule.

“We wanted to design a system that could connect to everything to provide the most insightful information possible, along with the customized tools needed for taking action and implementing improvements based on this information,” Tatham explains. “We tried to make it as abstracted and configurable as possible to enable the delivery of complete and customized solutions for everyone. Being able to work with existing equipment, systems and infrastructure is essential because it minimizes the cost of implementation and disruptions to production, while maintaining the value of the customers’ past investments by continuing to make use of them.”

Their success today
What began as five friends with a dream has grown into a business with 10 employees, along with plans to hire “a few more” soon. MAJiK has either doubled or tripled its revenue each year over the last few years and expects to continue that growth. The system is currently implemented in eight factories in Canada and two in the U.S. The team has been targeting ever-larger companies, and has several pilot projects about to ‘go live,’ after which each of the involved companies will hopefully expand the system into many of its facilities.

“We are primarily focused on food and beverage manufacturers and automotive suppliers, but we are also working with other types of consumer packaged goods and industrial supply manufacturers,” Tatham says. “Over the last couple years, we have really zoned in on where our system is the best fit and how to work with manufacturers to make each project as impactful as possible.”

Tatham believes there is a definite push for innovation in manufacturing in Canada. “This is in part being driven by new emerging technologies in the Internet of Things (IoT) space, young workers with familiarity of these technologies joining the engineering and management teams, and the need to stay efficient and reliable in such a competitive market,” he explains. “This trend is noticeably opening manufacturers’ eyes to the different places new innovations can come from, and we are seeing a growing support for startups and entrepreneurial endeavours as the potential solution. Bringing this technology and connectedness into manufacturing is definitely the next wave of industrial revolution.”

When asked his best three pieces of advice for other young people thinking of starting their own tech businesses, Tatham focuses on customer service, the bottom line and passion. “Know your customers and help them with their problems,” he says. “Business is about generating value by providing value to your customers. You don’t want to start by building a solution and then looking for a problem to apply it to.”

Tatham recommends the other focus to be on running a lean and mean operation. “Be business focused. Understand the economics of your operations, prioritize sales, and never stop learning and innovating. You need to stay competitive to grow.” Lastly, follow your passions but seek a balanced life along the way. “You want to work on something meaningful, be committed, and work hard,” Tatham stresses, “but don’t forget to look after yourself and have some fun.”

***
A MAJiK-cal experience
By Treena Hein

One of the installs MAJiK recently performed was at the Guelph, Ont., plant of Blount Canada in February 2016.

Blount International is a manufacturer and marketer of chainsaw and other replacement parts, equipment and accessories in more than 110 countries around the world under the brand names OREGON, Carlton and KOX. The Guelph manufacturing facility makes saw chains, chainsaw bars and sprockets.

Jeroen Ahsmann, part of the Guelph plant’s ‘Chain Manufacturing Engineering’ division, says what they wanted from MAJiK was two-fold: real-time and historical reporting on equipment faults, and up/downtime tracking. “It was very important that the system connected directly to existing equipment and existing Factory Information Systems utilizing the IT infrastructure we already had in place,” he explains. “This kept the cost low for the MAJiK installation in the Guelph plant and also in the subsequent install in the Portland, Ore., factory. This was especially beneficial for the Portland plant as this is a temporary home for the equipment being monitored.”

MAJiK was onsite in Guelph for about four hours to install, monitor the system and respond to questions. At first, Ahsmann says there were some issues around consistency of how the faults were labelled by the machine HMI and in the MAJiK reports, but the MAJiK team worked with Blount’s PLC programmers, engineering and operational staff to harmonize and streamline this.

“We are very pleased with the system,” Ahsmann says. “We are definitely benefiting from having access to accurate, real-time and historical machine information presented quickly and easily. This has helped facilitate more productive problem-solving between the service groups, engineering and production. And there is no longer any time spent in the creation and circulation of reports.”

Ahsmann describes the MAJiK team as very pleasant to work with. “They understand manufacturing and what their product needs to do to help operational teams in a given plant,” he says. “They are technically proficient and address customer requests with a high sense of urgency.”

This feature was originally published in the October 2016 issue of Manufacturing AUTOMATION.