Features Factory Automation
Control issues: Do you need to choose a side in the PC-PLC tug-of-war?

Through the ’90s and the past decade, PCs became indispensable to every business, and naturally, many people and vendors started looking at using them to control machines and processes on the factory floor. Now, some automation vendors and systems integrators are saying PCs can be used for machine and process control in an increasing number of applications.

For example, in 2004, McCain Foods of New Brunswick implemented a PC-controlled refrigeration system in its new frozen foods plant in Maine to precisely control temperature and optimize energy consumption of multiple compressors. Systems integrator TechCold International, based in Keswick Ridge, N.B., wrote a sophisticated control system in a computer language easily processed by a PC but not by even a top-of-the-line PLC. The software also communicates with almost every PLC from every manufacturer on the market, and developing interfaces and drivers is relatively straightforward — not true for PLCs. Not only does the system reduce costs, energy consumption and greenhouse gas emissions, says TechCold president Ernie Adsett, it also can be duplicated in McCain’s other plants around the world. The project attracted a lot of attention in the automation world. 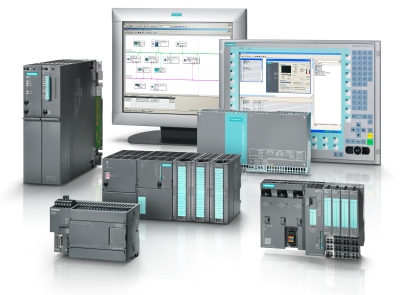 In the ’90s, Siemens, a longtime player in the PLC and automation field, brought out “soft PLCs,” software that runs on a Windows PC and emulates sophisticated PLCs. Its Simatic line reduces control costs by 20 to 30 percent compared to traditional PLCs, says product manager Ehab Rofaiel.

The idea of using a PC to drive automated systems was originally met with considerable skepticism. PCs, after all, crash, which could lead to production downtime and critical data loss. Siemens’ solution was its RTX real-time operating system, an OS that runs alongside Windows in the PC that keeps going even if Windows stops for some reason. Siemens has been demonstrating it in operation for years and is making headway in convincing the market that it’s viable. “Every month, we see more acceptance of PC-based controls in the market,” Rofaiel says.

Some, however, maintain that PCs just aren’t cut out for real-time manufacturing automation control.

Very early on, some manufacturers noticed PCs weren’t always performing as quickly or reliably as their old-fashioned PLCs.

“Some customers who switched from PLCs to PC control have gone back to PLCs,” says Bill Black, controller product manager with GE Fanuc, a major supplier of PLCs. “They’ve found that it’s more difficult to get support for PC control.” One reason is that regular updates to the operating system or control software often requires updates to all the drivers. And costs of PLCs have fallen recently, as well.

“Controllers have gotten more sophisticated, faster and able to handle larger programs today,” he says. Today, manufacturers who want to automate can choose between PLCs, PCs and a hybrid of the two to control processes and machines, monitor factory floors and ensure safety. But how do they choose?


Strengths and weaknesses
PLCs were developed specifically for the manufacturing plant: dedicated to a limited set of tasks, they’re rugged, resistant to the rigours of the factory floor, such as vibration, heat and dust. “PLCs are reliable. They do their job well,” TechCold’s Adsett says.

A PLC’s main advantage, though, is not so much that it’s fast — today’s PCs have processing speeds that are orders of magnitude faster — but that its simple operating system (OS) means its main processing power is always available for the unit’s main task, explains Nicolas Arel, a systems integrator based in Montreal. Windows, the most popular PC operating system, demands priority on the central processing unit’s attention. In other words, if the machine that the computer  controls sends a signal at the same time that the OS sends a routine instruction to the CPU, the OS instruction will be processed first, forcing the machine’s signal to wait. If you’ve ever been frustrated by the hourglass symbol when you’re doing fairly simple work on your PC, imagine if that happens when a critical alarm signal from a manufacturing operation has to wait for the OS to refresh.

Worse, conflicts for computer processing cycles from different processes can cause the computer to crash, which can halt production lines or critical operations and even put people at risk if the system is controlling a safety-related process.

Because PLCs have been around for more than 40 years, their use is well known in manufacturing settings; programming them is relatively simple, and in most manufacturing plants, electricians know how to set them up and troubleshoot them.

But their functions are limited, like their programming language. They can handle input and output, but complex tasks are difficult to program using ladder logic. Setting up different responses to a wide range of circumstances that might occur is far easier in one of the richer, more modern programming languages used in personal computers.

Another limitation is that PLCs are proprietary systems; while manufacturers can choose from a wide range of suppliers, Allen-Bradley’s PLCs are not compatible with Omron’s or Siemens’. This limits the manufacturer’s choice and flexibility.
The personal computer, however, is (if anything) flexible. A multi-purpose device, it’s well suited to handling a wide range of tasks and integrating data in a way that’s easy to understand.

And while PLCs are well accepted and widely understood on the factory floor, PCs are equally well understood in the office. PCs are good at linking information from the factory to the front office. They’re often used for monitoring efficiency and displaying activity to management.

Today’s PCs use very powerful computers with extremely high data speeds compared to PLCs. They can handle images at high speeds and can be made compatible with many other computers, networks and even PLCs. And because they’re so widely known, there are a lot of people available who know how to program them.

But PCs are not typically rugged systems; they’re susceptible to heat, dust and vibration and have to be “hardened” or “ruggedized” for use on the factory floor. They’re also susceptible to computer viruses (something PLCs don’t have to worry about) and being hacked. And worst of all, they’re prone to crashing. This can lead to loss of data, which can be a huge problem and cause expensive delays when the PC is controlling critical manufacturing operations.

“PLCs are good for interlocking operations, and fast decisions. They’re not so good with high-speed data collection or complex programs,” Adsett says. “PCs are better suited to monitoring, optimization and analysis — making sure you’re getting out of a process what you should be.”


The hybrid approach
However, PCs and PLCs are not an either-or choice. Almost every systems integrator advocates using them side by side.

Even Simatic’s Rofaiel says PCs cannot completely replace PLCs. “PLCs are best suited, for example, in fault-tolerant applications, where you have two PLCs running side by side so that if one goes down, the second kicks in instantly,” he says.

Systems integrator Arel says there is a place for both PLC and PC control systems. “The PLC’s computer power is not as good as a PC’s,” he says. “Their speed is limited.”

He worked on an installation for a printing company that prints numbered lottery tickets. Quality control is essential, so the company needed a fast and precise way to track all production and any wasted paper or tickets due to paper breaks or other production problems. Managers also wanted to link all the different equipment for a real-time, accurate picture of productivity in their plant. “Printing goes at 1,000 feet per minute, and they want to take it up to 2,000 feet per minute,” he says. That means they need very fast data exchange between the plant floor and the front office systems. “The amount of data is humongous.”

The solution was using PLCs on the equipment for tracking of lottery numbers, with a PC system on top of that for the data exchange and quality control applications.

TechCold’s Adsett agrees with this hybrid approach. “When we go into a customer’s plant, we don’t say, ‘You have to replace all your PLCs with PCs.’ Instead, we add a layer of control on top of the PLC system.”

PC in a PLC
Luckily, manufacturers don’t really need to choose between PLCs and PCs anymore. “The evolution of the programmable automation controller (PAC) has removed the barriers between PCs and PLCs,” says GE Fanuc’s Black. PACs combine PCs and PLCs, adding the newest high-speed and flexible microprocessors to the rugged, reliable operation of PLCs and using newer, reliable, customized operating systems.

Combining the two types of controllers means PACs are being used not only for process and machine control but also data acquisition, machine vision and remote monitoring. They can handle multiple communications protocols, including PC protocols from TCP/IP to OLE for process control (OPC), and PLC Fieldbus networks such as Profibus, RS-485 and others. They can also have USB ports and Ethernet connections.

“PACs can use more sophisticated programming languages like structured text, which makes programming them for math functions more intuitive. And they can handle tasks that can’t be programmed with ladder logic,” Black adds.

Simply put, choosing a side is not a necessity. With ever-evolving technologies and hybrid approaches, it’s just a matter of settling on an approach that fits the application.

Scott Bury is a freelance writer based in Kanata, Ont.