The powerful combination of connected sensors and artificial intelligence is providing exciting new ways for humans and machines to interact in the pursuit of operational excellence. 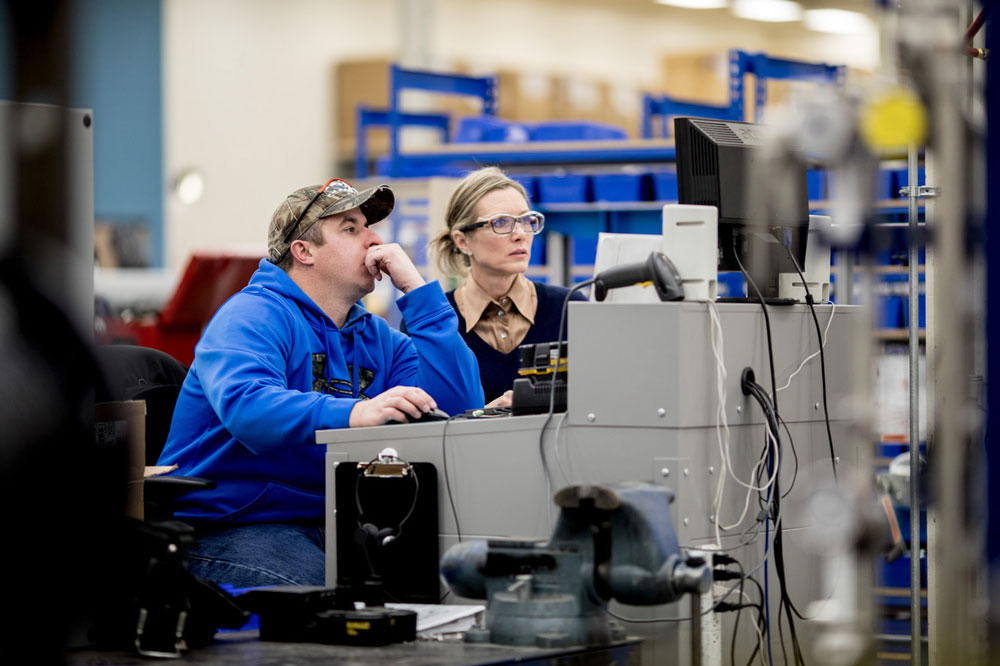 Although smart automation is a hallmark of manufacturing’s digital age, one of its most influential innovations is now approximately a century old.

In the early 1900s, Toyota founder Sakichi Toyoda developed an automated loom equipped with a mechanism that stopped production automatically when a thread broke. The innovation helped his company, which eventually became Toyota, pursue two goals simultaneously: improve quality by catching defects at the point and time of occurrence and, since the machines could now run unsupervised, increase worker productivity.

The underlying principle was dubbed “autonomation” (jidoka in Japanese), meaning automation with human-like intelligence. Jidoka became, along with just-in-time, a pillar of the Toyota Production System and the Lean manufacturing movement that followed.

Today, manufacturers are applying artificial intelligence (AI) to pursue a very similar goal – catch defects at the point and time of occurrence in order to improve quality and simultaneously, free workers from repetitive tasks so that they can spend their time on higher-value work. The new tools are so effective at detecting anomalies that they are likely to have a major impact on operational excellence and the quality movement.

In one example, Kitchener, Ontario–based Acerta Analytics Solutions is helping a Japanese Tier 1 automotive OEM reduce defects in the manufacture of transmissions. The problem presented to Acerta was that the end-of-line (EOL) quality management process, which was based on statistical process control (SPC), was producing false negatives that resulted in warranty claims.

The company wanted an AI model that could generate an abnormality score indicative of quality in order to improve the accuracy and efficiency of the EOL process.

Acerta applied unsupervised machine learning to signal data from sensors across the value chain in order to establish patterns that might be indicative of pending failure. This approach is fundamentally different from established SPC methods.

“The main difference in the machine learning approach versus statistical process control is that we’re not just dictating ‘here are the tolerances or thresholds – just stay within them,” says Acerta CEO and co-founder Greta Cutulenco. “We’re learning over time how the data across all these different operations and hubs are related to each other, and what the basic behaviour is across these different stations. And unlike just looking at thresholds, we’re a lot more precise – we can look at very precise correlations and relationships between the different signals.”

Based on the validation of the abnormality scores generated by the model, the company expects to be able to eliminate steps connected with the previous EOL inspection process and reduce the costs of warranty claims by up to 30 per cent. Acerta is currently expanding the solution to work with other lines.

Machine learning’s anomaly-detection capabilities are also being applied to another important operational excellence area – anticipating and preventing equipment failures in order to reduce the costs of expensive repairs and downtime.

“A lot of what we’re doing is related to asset operation certainty,” says Rajiv Anand, CEO and co-founder of Oakville-based AI solution provider Quartic.ai. “People call it predictive maintenance, but we don’t believe in that term. We believe it’s about building an asset to do what it’s supposed to do when you want it to do it.”

The distinction is an important one – instead of focusing on what failure looks like, the Quartic platform uses machine learning to establish a baseline for the normal health and operation of an asset, regardless of the varying conditions that it might operate under. The platform then monitors the equipment 24/7 according to that baseline.

Anand points out that machine learning is not necessary for machines that make only one product and run at a steady state. Where it’s valuable is when the equipment has to operate under varying temperatures and pressures, or to produce a wide variety of products.

Workers see that they no longer have to rely on their intuition, but can make better decisions based on data.

In a recent use case, Quartic helped a pharmaceutical manufacturer ensure reliable operation for their industrial autoclave, which is central to many of their processes. The manufacturer now plans and schedules maintenance on the asset based on intelligent data from the Quartic platform.

“They wanted to make sure their people had confidence that the equipment would run, but the outcome was that they got not only confidence – they got to reduce the major overhauls from the OEM,” says Quartic co-founder Blair Fraser, noting that it can host hundreds of thousands of dollars to service the equipment.

“When it comes to details, we might be doing IoT, or we might be doing Industry 4.0, smart manufacturing, or artificial intelligence,” says Anand. “But at the end of the day, what we’re trying to drive for the CEO is operational excellence.”

There is considerable concern that Industry 4.0 automation will either eliminate jobs or put workers on a steep learning curve. The emerging use cases, however, indicate a desire to maintain the existing workforce and help them be more productive.

“We haven’t had a client come to us and say ‘I want to reduce the headcount,’ or that jobs need to be eliminated,” says Humera Malik, CEO of Toronto-based Canvass Analytics. “The impact to the workforce, I believe, is not about eliminating jobs. It’s about creating higher level function – augmenting the workforce to a point where they are becoming the future workforce.”

Hamilton-based steel producer Stelco has selected Canvass to help make this transition. “By partnering with Canvass Analytics, we are systematically transforming our facilities into intelligent operations environments and augmenting a digitally oriented workforce in order to take the efficiency of our operations to the next level,” says Stelco executive chairman Alan Kestenbaum in a press release.

AI interacts with workers at two different levels, Malik explains. Low-level machine learning is used to learn and then automate repetitive processes done by humans, such as quality inspections or making manual changes to functions. “You learn how it’s being done,” says Malik, “and you then can do it better and faster and more accurately.”

For sophisticated tasks that require human intervention for decision-making, AI can provide information to support those decisions. “With high-level AI, you can actually equip [workers] with the right information at the right time so that actionable intelligence can be applied by humans,” says Malik.

One of the challenges is getting workers to accept the new tools as part of their work environment. “We’re working to get the fear out of AI and empower operators to use it in their day-to-day operations,” says Malik. One of the “a-ha” moments, Malik notes, occurs when workers see that they no longer have to rely on their intuition, but can make better decisions based on data. Canvass is working to adapt its analytics platform so that it can be used by process engineers, and not just data scientists.

Ultimately, manufacturers are hoping that the new technology will help them address the growing skills gap caused by the pending retirement of large numbers of experienced workers.

“The next generation of people going into manufacturing is not what we had 40 years ago,” says Malik. “This is a digital generation. When we go in with AI, we’re giving our customer more opportunity to attract and retain.”

A condensed version of this article originally appeared in the October 2019 issue of Manufacturing AUTOMATION.