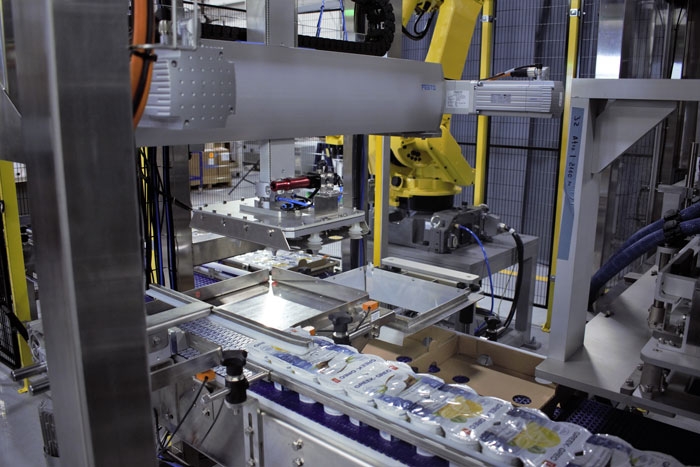 March 27, 2019 – In the highly competitive world of custom machine design, being open to change is a key to sustaining success.

Modifying a tried-and-true concept with new technology – even when the old would satisfy the customer’s requirements – can capture cost savings and other benefits without adding complexity.

Before its recent acquisition by Saputo Inc., Shepherd began an expansion to add volume and formats to meet increasing consumer demand for products such as its Greek- and Icelandic-style yogurts. Shepherd had installed a third filler in the food zone and needed more tray loading and palletizing capacity in the packaging room. Its existing setup was a single tray loader with manual palletizing.

Nuspark’s was the winning bid, and while not the lowest, price was certainly a major consideration, says Boris Motskin, general manager at the Toronto-based machine builder. The order called for two new machines with integrated tray forming, loading and palletizing rated at 10 trays per minute, as well as a standalone palletizer for the existing tray loader. New machine #1 would load 500-gram and 900-gram round tubs, and potentially other sizes (the standard tub, no matter the capacity, has the same universal four-inch diameter lid). New machine #2 would load four-packs (two-by-two) of peel-back, single-serve cups.

Building custom case packers and palletizers for food and beverage is Nuspark’s bread and butter. “We emphasize a respect for our customer’s real estate – every machine is one of a kind, depending on the restrictions and constraints that our customers have,” says Motskin. “With Shepherd, they gave us the space and said, ‘We have to fit three lines in here.’” Every Nuspark case/tray packer, whether rated for 10, 25, 100 or 600 products per minute, is based on some common principles, including exclusively single-frame, stainless-steel construction (all welded in-house), top running of all cabling and IP67-rated sensor connectors as standard. The packer employs brand-name componentry throughout: Festo pneumatics, Nordson glue dispensing, Fanuc six-axis robot for palletizing, and Bosch Rexroth and Allen-Bradley electrical systems.

Previously, the company would have used top-mounted Delta-style tray loading comprised of a two-axis robot and servo motors from two different manufacturers for tray-loading in a project of this type. Instead, Nuspark engineers substituted a compact, bottom-mounted Festo EXCT-100 high-speed linear gantry with vacuum gripper, combined with a motion control package, also from Festo.
On Shepherd’s new machine #2, the gantry loads a full 24-cup tray with a single pick, which is less than its maximum payload weight of 10 kilograms. The EXCT’s two fixed servo motors drive a toothed belt arranged in a T-shape. The motion control package, configured for Ethernet IP, synchronizes the interaction of the servos to control the movement of the interface along the horizontal (Y) axis with a consistent pick accuracy of +/- 0.1 millimetres.

Substituting the EXCT for the Delta-style top mount lowered the overall machine cost. “The benefits as a whole are functionality, ease of integration is important, and the cost is probably the most important thing because at the end of the day we still have to be competitive in the market,” says Motskin. The EXCT-100 is rated for up to 90 picks per minute, but high-speed motion wasn’t needed here. “We had been investigating this gantry for some time and it was just a matter of getting the right application for it,” says Motskin. “We preferred for a first experience not to try it on a higher speed application,” he says, so his team could get comfortable with the new technology and bring the end user on board more easily.

The all-in-one hardware/software motion control package can be set up to control any standard Festo Cartesian robot as well as the specific applications they are to perform, with no special programming knowledge required. The robot and motion control package come pre-assembled and pre-tested and can be coupled together, whereas the Delta-style top-mount that Nuspark has used exclusively up until now requires in-house assembly. (The location of the gantry is another potential benefit – there was no height restriction at Shepherd, notes Motskin, but there could be in other projects, and the top mount rises well above the top of the machine frame.)

The Shepherd project showcased the versatility of Festo’s motion control package concept, which is helping to break psychological barriers about combining handling solutions with control systems from different suppliers. As part of the pre-planning phase, says Ray Reginato, industry segment account manager, electronics and assembly at Festo Canada, his team also performed detailed cycle-time analysis, which showed that the EXCT/motion control combination would perform just as well with the end user’s single-phase, 230V power supply as it does with three-phase 480V, which is the available power supply for all previous installations in Canada.

Says Reginato, “The ability of this combination of technologies to work equally well with 230V power provides more OEMS and end users with an attractive alternative for case-packing applications.”
_____

David Gersovitz is a marketing communications professional who works with a number of manufacturing clients including Festo.