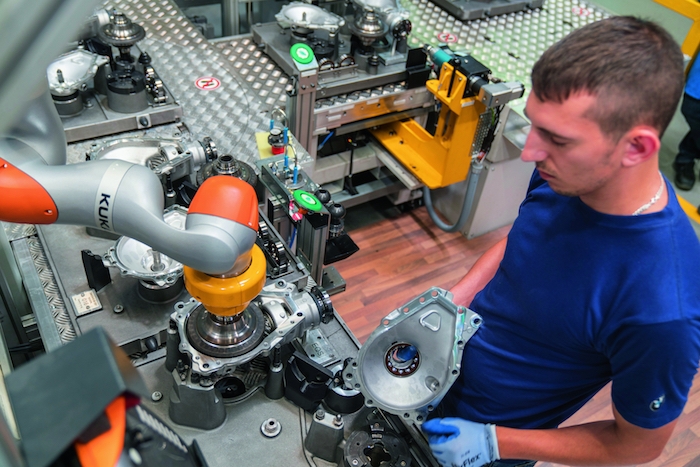 June 18, 2019 – Automation and digitalization can be used to make manufacturing processes more efficient.

Of particular interest here are cobots. These collaborative industrial robots work together with humans – without special protective measures such as fences or demarcated areas. In which processes are cobots already being used? How can collisions and any resulting risk of injury be avoided? Robotics manufacturers, suppliers of various peripheral components for automation solutions, as well as safety and scientific experts will be providing an overview of the current situation and giving forecasts for future developments at EMO Hannover 2019, the metalworking trade fair.

Different validation methods have to be applied to human-robot collaboration (HRC). For example, it is imperative that measurements are taken to determine the safety risks involved in any possible collisions. Pilz has developed its own method for this. A system measures the forces acting on the human body and compares them with the ISO/TS 15066 limit values for collaborative robots.

“The challenge is to eliminate any boundaries between the working areas of humans and machines. In addition to the dangers posed by the robot, human movements must also be taken into account,” says Vetter. The speed of these is not always predictable, nor are human reflexes or the sudden arrival of other people. “Collisions, however, should never result in injury.”

Injuries must be prevented by the use of more reliable control systems and intelligent, dynamic sensors built into the robot. In addition, it is important to set reliable safety standards based on normative principles.

“The interaction will develop ‘organically,’ for example, in terms of language and gestures,” says Vetter. “This will take HRC to a new quality level for a different category of actions. In addition, HRC solutions will in future be linked to the factory control system via OPC UA or Industry 4.0 RAMI standards. Potential areas of application lie not in large-series production, but in the manufacture of medium and small series. HRC makes sense in situations where employees can be relieved – ergonomically – of physically strenuous tasks, such as in maintenance work.”

Gripping workpieces of up to eight kilograms using safety intelligence
“The biomechanical limits specified by ISO/TS 15066 have so far restricted the use of cobots to the handling of small parts, for example in assembly applications in the electronics industry or in the pick & placing of housings, turned and milled parts, etc.,” says Professor Markus Glück, managing director of research and development, chief innovation officer at Schunk GmbH & Co. KG, Lauffen/Neckar.

“Our EGL-C long-stroke gripper, however, allows a new scale of components to be manipulated. For the first time it is possible to handle workpieces up to eight kilograms safely with form-fit gripping. This opens up great potential, including for machine tools or in assembly.” Thanks to integrated safety intelligence (patent pending), the co-act (collaborative actuator) EGL-C has succeeded in achieving gripping forces of up to 450 N in collaborative applications. This is around three times greater than before and represents a world first – and the technology will also be on show at EMO Hannover 2019.

“HRC will radically change the world of work,” predicts Glück. “The focus is on improving the ergonomics, creating more flexible work processes, increasing efficiency and optimizing processes. Intelligent gripper systems will permit higher component weights to be handled in the future. In addition, 24V technology will enable them to be deployed on mobile platforms, which will gain in importance as a result. There is also great potential for the use of lightweight robots to assist in assembly.”

A new era in machine tool charging
“Collaborative and mobile robot systems offer new possibilities for the automation of machine tools. For the first time, automation can break out of its rigid constraints and achieve unprecedented levels of flexibility and productivity thanks to innovative robotic solutions,” says Peter Pühringer, division manager at Stäubli Robotics in Bayreuth.

In order to maximize this flexibility, Stäubli has designed its new six-axis TX2 generation for universal use. The robots in the new version can collaborate directly with humans. They are also available as mobile and collaborative robot systems. “This heralds a new era in machine tool charging,” says Pühringer. The robots work both in standalone operation and directly with machine operators. Mobile versions of the robot can easily link different machine tools together and take care of the complete workflow in an Industry 4.0 environment. “This unbelievable flexibility allows completely new, digitally networked production processes to be created,” says Pühringer. “These will significantly increase productivity and give innovative enterprises an unprecedented competitive edge.”

Sensors help avoid possible collisions
“At present, cobots are frequently used for simple handling processes, such as charging machines. Although there is often no safety fence, they are equipped with additional safety features and are not generally used for direct human-robot collaboration,” says Professor Gunther Reinhart, chair of industrial management and assembly technology at the iwb (Institute for Machine Tools and Industrial Management) at the Technical University of Munich.

“Work is currently focussing on HRC planning support, on safety, and also on instructing the robots. Safety-related innovations are aimed at detecting possible collisions in advance through the use of different types of sensors – such as capacitive or ultrasonic sensors – or cameras.”

Many companies remain unsure of how to comply with the current standards. “In particular, it is important to know how to interpret the values given in ISO/TS15066,” says Reinhart. “Once the legal issues of occupational safety have been clarified, collaborative robots are likely to be used mainly in assembly.

“Other major potential applications include ergonomic assistance. For this, however, there must first be more HRC robots which are capable of handling higher payloads.”

This article was written by Dag Heidecker, daxTR – Technik + Redaktion.