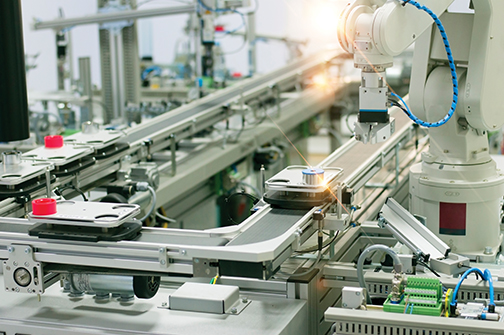 The International Federation of Robotics (IFR) has shared its top five robotics trends shaping industries around the globe.

Annual global installations of industrial robots have more than tripled between 2010 and 2019, reaching 381,000 units in factories around the world, the agency says.

“The mission to combine traditional production with ‘go digital strategies’ puts robots in a pole position,” says Dr. Susanne Bieller, general secretary of the IFR, in a statement.

Artificial intelligence software in combination with vision and other sensing systems, allow robots to master difficult tasks. One such task is bin picking, that in the past was only feasible for a human hand. New generations of robots are easier to install and program and they are connectable. Advances in communication protocols integrate robots seamlessly into automation and Industry 4.0 strategies.

The future belongs to networked interaction of robots and autonomous guided vehicles – or rather, autonomous mobile robots (AMRs). Equipped with the latest navigation technology, these mobile robots are much more flexible compared to traditional production lines.

Car bodies are conveyed on driverless transport systems. They can be decoupled from the assembly line flow and redirected to assembly stations where individually equipped variants can be assembled. Wh

en models are changed completely, it is only necessary to reprogram the robots and AMRs rather than to dismantle the entire production line. With the integration of human-robot collaboration workstations picking up momentum, robot suppliers report robots working hand-in-hand with humans without fencing.

The connectivity breakthroughs contribute to increased robot adoption in manufacturing sectors that have only recently turned to automation, such as food and beverage, textiles, wood products and plastics.

Ongoing digital transformation will lead to completely new business models, because producers can diversify more easily than ever. In the smart factory, different products are assembled subsequently by the same equipment – the traditional production line no longer exists.

Investments in modern robot technology will also be driven by the requirement for a smaller carbon footprint. Modern robots are energy-efficient, thus directly reducing energy consumption of production.

Through higher precision, they also produce fewer rejections and substandard goods, which has a positive impact on the ratio of resource input over output. In addition, robots help in the cost-efficient production of renewable energy equipment, such as photovoltaics or hydrogen fuel cells.

The pandemic situation has made the weakness of globalized supply chains visible. Manufacturers have the opportunity to rethink supply with a completely different outlook.

When productivity is levelled through automation, manufacturers have increased flexibility that may not have been available in high-wage countries like most of the European Union, North America, Japan or the Republic of Korea. Robotic automation offers productivity, flexibility and security.

“The COVID-19 pandemic hasn’t started any new trends, but it accelerated the use of robotics beyond established practice. In this respect, the pandemic has proven to be the biggest single driver for change in industry.”