Sensor manufacturer SICK takes us inside its new Industry 4.0 factory in Germany. What does it mean for Canada? 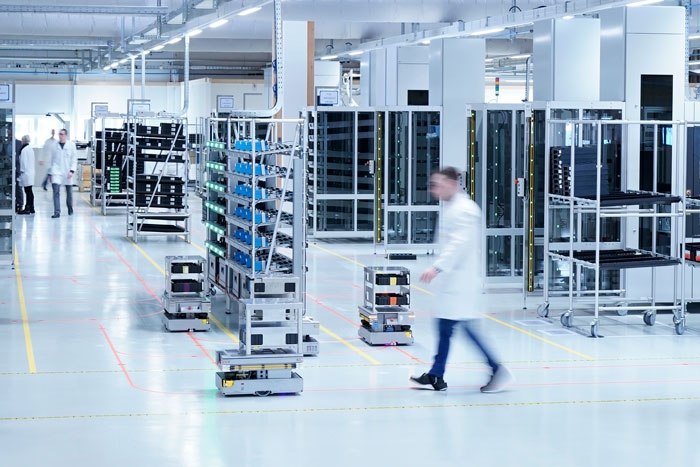 May 9, 2019 – When I first stepped into SICK AG’s sparkling new 4.0 NOW Factory in Freiburg, Germany earlier this year, the first thing that struck me was how quiet it was.

To be clear, there was much production going on – the space will manufacture 1.2 million pieces of the company’s sensor-related solutions per year once fully commissioned, joining other SICK manufacturing facilities in the United States and Asia as one of the company’s most productive hubs for sensor making. But this new factory is markedly different from its counterparts.

The 4.0 NOW Factory is automation at its peak – a new home for Industry 4.0 technologies and processes, all located under one roof. Only 13 people are currently employed here, with the rest of the work completed by industrial robots in flexible manufacturing cells, or by autonomous guided carts (AGCs) on the shop floor. The purpose of 4.0 NOW is not to replace human workers, but to show how they can thrive alongside automation to achieve maximum efficiency – consider it a test bed that demonstrates the capabilities of Industry 4.0 practices, in addition to being a fully functioning manufacturing plant.

“In our business, industrial automation and Industry 4.0 are two sides of the same [coin]. They’re directly linked together,” Dr. Robert Bauer, chairman of SICK AG’s executive board, told me and the other members of a press tour at the company’s Waldkirch, Germany headquarters in January 2019. “The data-driven idea of Industry 4.0 is to better organize the factory.” 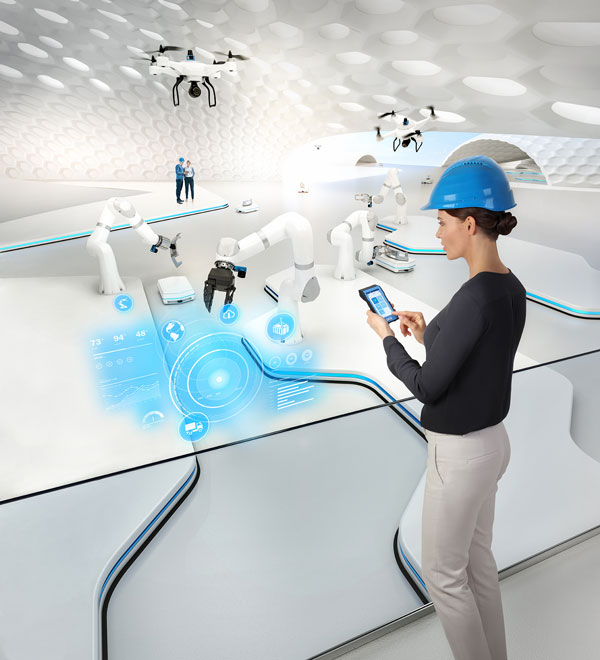 A factory for the future
With the 4.0 NOW Factory, SICK is doing exactly that – breaking down traditional line-oriented production into non-linear “technology cells,” and using sensors to collect actionable data.

“The key component of Industry 4.0 is autonomous flexibility on the production line,” says Bernhard Müller, senior vice-president Industry 4.0 at SICK. With 12 manufacturing cells that can be reconfigured to produce a multitude of SKUs, that flexibility translates to 1,050 square metres (11,302 square feet) of total space – a relatively small footprint compared to the average manufacturing plant.

The factory is still in a ramp-up phase after beginning operation in Q2 2018, with one shift of 13 workers and a target of three shifts. The AGCs use SICK sensors to move freely from cell to cell along six aisles, employing pick-by-light technology to fill and transport trays of components. The production control system is also able to interact with manual workstations, which are connected to the machines. In one corner, several of the factory’s workers attend to a small, more traditional-in-style production line – an unofficial proof-of-concept that automation is changing the roles of humans in manufacturing.

Once at full capacity, 4.0 NOW could theoretically manufacture 500,000 product variants, allowing for more customer orders and better resource efficiency. “We are facing the fact that our market is really dynamic,” says Joachim Schultis, head of operations for photoelectric sensors and fibres at SICK. He projects that 4.0 NOW will not only allow the company to build products on demand and reduce its inventory level, but also achieve increased OEE and just-in-time orders.

The factory uses a SICK-developed software integrated with enterprise resource planning (ERP) software to continuously upload data from all of the AGCs, components and production cells to a cloud. This enables the use of tools such as BOSCH Production Performance Management, a protocol that captures data from sensors and machines to analyze process efficiency and execute predictive maintenance. From there, SICK can further optimize the logistics in the factory, from travel paths of the AGCs to control of the material flow. 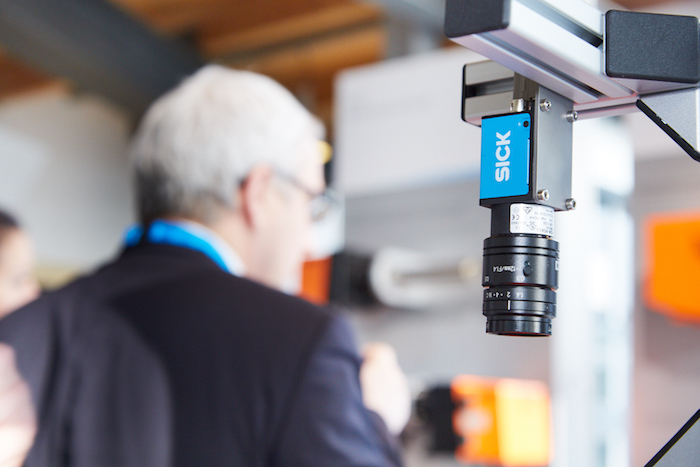 Depending on the application and accuracy needed, SICK employs a range of positioning technologies for its mobile applications, including ultra-wide band tags, LiDAR contour mapping, line guidance sensors and infrastructure sensors. True to the company tagline “Sensor Intelligence,” SICK has also developed a software ecosystem, dubbed AppSpace, to solve applications via apps on programmable SICK devices. AppSpace supports sensor applications, data-to-information applications, or the integration of both. Users can either download pre-built SensorApps or develop their own SensorApps by defining the application logic and customizing a dashboard based on their individual needs.

Going all-in on an Industry 4.0-enabled factory is bold in the marketplace, says Müller. He estimates that while 30 to 40 per cent of German companies have “islands” of Industry 4.0 concepts, like a predictive maintenance program or autonomous guided vehicles, only one to five per cent of them employ automated material flow, which is integral to total process optimization.

The hallmarks of Industry 4.0 design principles are connectivity, transparency, flexibility, and fast, decentralized decisions, Müller says. The common goal is to reach “Lot Size One” – the concept of a single item quantity for an order – at the cost and speed of mass production, with resource efficiency.

“You get a lot of noise about automotive factories being in Industry 4.0,” he says. “They have perfected their production lines but always in the same manner they have done it before. Not in a disruptive way [based on] data.”

Bringing Industry 4.0 to Canada
Craig S. Smith, president of SICK Ltd., the Canadian branch of SICK AG, says there are some remaining barriers to implementation of Industry 4.0 concepts in Canada.

“I think there’s fear. It’s normal to think, ‘Oh, technology is going to take my job,’” he says. “Yes, some doors in old-school manufacturing may be closing, but that opens up new opportunities in other areas around technology.”

Despite technology shifting the types of roles that are available, Smith notes that competency will still be one of his biggest challenges in promoting the Industry 4.0 mindset with Canadian manufacturers. Unemployment rates nationwide are low, at 4.8 per cent, and he’s had unfilled positions at the company for over a year.

The other challenge to establishing Industry 4.0 practices in Canada is the rate of upgrade. “A manufacturing facility isn’t going to do a complete rebuild again; they have to do a stage build. They need to keep their manufacturing running and build in the new flexible manufacturing concepts out there over time,” says Smith. “We do site visits; we do training; we try to understand our customers’ biggest problems. And to understand how we can help them to reduce costs, improve production yields and reduce cycle times.”

Smith has been leading SICK Canada since 2009, shortly after SICK AG acquired AMKO Systems, a Toronto-based distributor of SICK process automation instruments. In April 2012, Smith was tasked with bringing the company’s factory automation and logistics automation businesses into Canada, and he’s since grown the company from $7 million to over $30 million per year in sales. In June 2019, SICK Canada celebrates its 10th anniversary with a move from its 1,031 square-metre (14,000-square-foot) office space in north Toronto to a 2,230 square-metre (24,000-square-foot) building next door, with plans to build a customer-facing showroom of sensor products.

Twenty-five per cent of SICK Canada’s revenue comes from the process automation market in Western Canada, and about 80 per cent of the company’s factory automation business is located in the Ontario-Quebec manufacturing corridor. Smith sees opportunities in logistics automation, where SICK Canada has seen 24 per cent growth in the last five years in airports, health care, transportation and consumer goods manufacturing. The factory automation side is also poised to grow as Industry 4.0 concepts begin to take hold in Canada. Smith plans to add two new subject matter experts in 2019 to handle mobile applications, and the company is working closely with customers to develop new solutions with products from the German headquarters that are tailored to individual manufacturing needs. 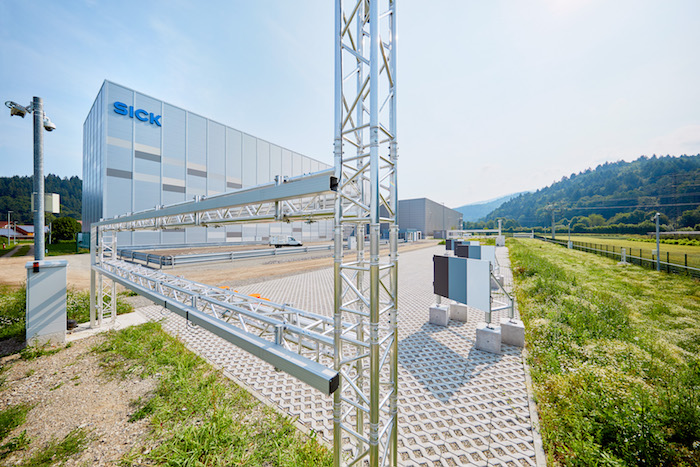 In 1952, SICK began serial production of its flagship product – a safety light curtain that stops a machine should a foreign object make its way past the sensor. Over the past 67 years, the company has added more safety-centric products to its portfolio, including photoelectric sensors, opto-electronic protective devices and vision systems.

Industry 4.0 is redefining what a safe product means in 2019. Now that machines and humans are working collaboratively, the leading thought is that instead of the machine stopping altogether if it detects a presence, it should slow down and enter a “safe mode” to prevent accident. “Safety in the past was a secure safety, so nothing happens ever,” explains Müller. “And now we try to make it more efficient while not injuring anybody.”

The company has developed laser scanners with fields of vision that can respond to positioning of objects – for example, an autonomous vehicle equipped with one of these scanners won’t stop if it’s turning right but detects a human on the left. And by implementing adaptive safeguarding solutions in Industry 4.0–style manufacturing cells, such as a camera that records an event only if it’s been triggered by a safety breach, maintenance or shutdown can be limited to just one cell rather than the whole line (pictured below). 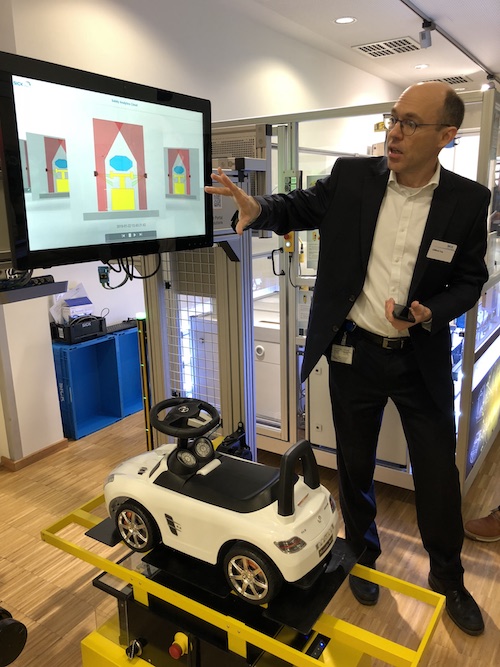 Investing in the future
SICK AG invests 10 per cent of its gross revenues every year back into developing integrative solutions. In 2017, that amounted to EUR 169.4 million for research and development. Over 1,110 of the company’s 8,909 employees work on R&D teams in cooperation with industrial partners, universities and institutes. The company holds around 3,000 patents. SICK is testing outdoor automation technologies for harsh environments at its Outdoor Technology Centre near Freiburg in Buchholz, Germany, which opened in summer 2018.

There are another 15 proprietary projects underway that the company calls “start-ups” – research teams devoted to development of new products and processes. “Some of them probably won’t work in the longer picture, but other ideas will come from them,” notes Smith. “In Canada, we’re taking a home-grown approach and bringing back that technology and knowledge to the education system.”

Over the next three years, SICK Canada will provide sensors and services worth $765,000, new training opportunities for students and staff in sensor intelligence and industrial automation, and two new scholarships.

“What I find in Canada is we’re not investing in youth. People are in internship programs working for free, and frankly, that drives me crazy,” Smith says, adding that despite the industry taking some big hits – such as layoffs at GM and Fiat Chrysler – there will be different types of jobs opening up as Canadian manufacturers employ new technologies.

“The part that I’m energized about is that we have organizations out there that are looking at things through a different lens,” he says. “There’s an opportunity to build the next phase of manufacturing in Canada. We have the drive to be better as a country in the innovative part of manufacturing. Industry 4.0 is a part of that.”
_____