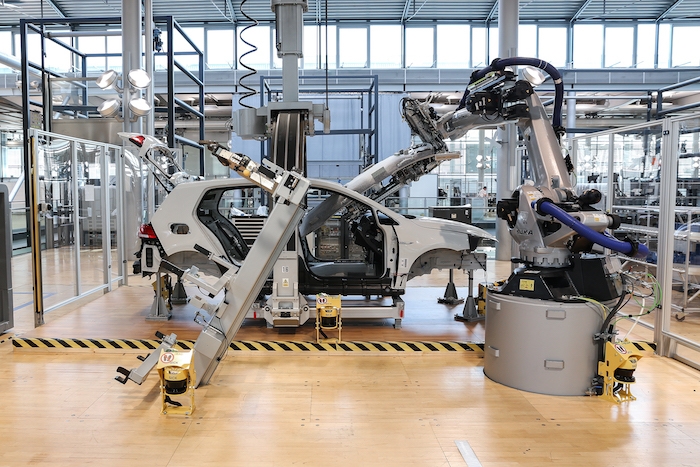 March 14, 2019 – Volkswagen Group has released a video of a robot installing the headliner for its e-Golf vehicle at its Dresden, Germany facility in what it says is a world-first standard.

The Gläserne Manufaktur factory is considered a “technical centre” project for innovation in conjunction with the Wolfsburg and Emden factories, built to achieve automation of complex work steps within assembly.

In the Gläserne Manufaktur, testing and development take place on an ongoing basis during production of the e-Golf. The headliner for the e-Golf is now being fitted by a robot as standard – and this manufacturing step will also be used in production of the ID.2 from the end of 2019 at Volkswagen’s Zwickau plant.

“We want to achieve a 30 per cent improvement in productivity in the Volkswagen brand factories by 2025 compared to 2018 to ensure our competitiveness in the long term and to make a decisive contribution to improving the profitability of the Volkswagen brand,” says Dr. Andreas Tostmann, member of the board of management for production and logistics of the Volkswagen brand. “To achieve this, the factories must become faster, leaner and more efficient. The various technical centre projects in Wolfsburg, Emden and Dresden make an important contribution to this by testing innovative technologies.”

Lars Dittert, site manager of the Gläserne Manufaktur in Dresden, says, “The Gläserne Manufaktur is the showcase for electric mobility and now also a pilot factory for the Volkswagen Group. The extraordinary aspect is that we are pushing ahead with our automation projects during production. A technology that makes it to series readiness can be used in the automotive industry worldwide. This enables us to integrate our expertise into the Group and further consolidate the profile of our site.”

The Gläserne Manufaktur has special requirements for an automotive production facility due to its unique architecture. For example, testing for optical component detection is challenging due to the high light incidence and associated contrasts. The sensors have to work under much more difficult conditions.

The safety requirements are also above average due to the large number of visitors. An average of 400 guests visit the Gläserne Manufaktur daily.

Furthermore, the small batch production of 72 e-Golfs per day is an advantage. The cycle time per workstation in Dresden is comparatively long compared to conventional production facilities. A lot of employees are therefore highly qualified to handle the larger workload at each workstation. Furthermore, the short distances between the workstations and the comparatively large work surface are an optimal environment for testing new technologies.

The innovations in Dresden are supported by Volkswagen brand planning and Wolfsburg plant engineering. Other projects at the Dresden site include the automated assembly and removal of the car doors and human/robot collaboration.