Workers are extensively trained on the TAD tissue machine at Kruger Sherbrooke. “The goal is to have a deep understanding of the technology,” says Mike Yang. Photo: Simon Duquette/Agence Nabi/Kruger Products

After a gruelling year of COVID-related curtailments and closures in pulp and paper, it was welcome news for the industry when Kruger Products announced in February that their new state-of-the-art tissue plant had been completed on time and on budget.

The Sherbrooke, Que. facility features a through-air-dry (TAD) tissue machine and three converting lines, which previously have been commissioned. At the time of this writing, the TAD machine was well along its maturity, just three months after starting up.

“We originally envisioned a multi-year maturity curve, which is very common in the industry,” says Michael Yang, senior vice-president, supply chain and operational excellence at Kruger Products. “Right off the bat, this is as close to a vertical start-up, especially on the tissue machine, than I’ve seen in my career.”

Many of the plant’s 180 employees are new to the pulp and paper industry. Kruger partnered with local vendors to conduct off-site classroom training covering the mechanical and electrical systems, safety features and machine technology. Employees from Kruger Products’ other tissue and converting plants, and from the corporate functions, travelled to the Sherbrooke plant to help with training and commissioning.

“We invested heavily in the operating and information technologies that we’ve overlaid into the equipment here,” Yang says. “We have far more digital information on this site than any in Kruger Products plant so far, so we’re able to solve the start-up issues that you would typically see in an operation like this.”

In June 2021, the company announced it would invest $25 million in the implementation of a digital twin of the Sherbrooke plant’s supply chain, using real-time data augmented with artificial intelligence (AI) capabilities.

While advances in new automation technology helped to make the start-up more seamless, Yang notes there was a bigger force at work. “It’s the partnership and the collaboration,” he says. “Our team members have gained lots of experience in this technology over the last 10 years.”

Kruger Products installed its first TAD machine at its Memphis, Tenn. plant in 2013. That $322-million machine adds 60,000 metric tons (tonnes) per year to Kruger’s production capacity. The Sherbrooke plant is responsible for an additional 70,000 tonnes of ultra-premium bathroom tissue and paper towels, sold in Canada under the Cashmere®, SpongeTowels® and Purex® brands, and as White Cloud® in the U.S.

The company maintains a close relationship with its equipment suppliers – for example, the new tissue machine was manufactured by the same supplier as the Memphis machine.

Yang credits this ongoing trust as another driving force for the smooth start-up. “We’re there from day one in terms of specifying in detail exactly what we want and how we want it,” he says. “We don’t just buy something off the shelf.”

Kruger Products announced the Sherbrooke investment in August 2018, which brought one million hours of construction work and $250 million of the plant’s $575-million total price tag into Quebec’s economy.

The team was well underway with the build when the pandemic hit. On-site, the team quickly ramped up its COVID-19 safety protocols: separating workgroups; enforcing physical distancing; reminding staff to intensify their hygiene routines and watch for symptoms; controlling entry and exit points; and supplying plenty of PPE.

“There was a lot of management and collaboration with them to make sure we got equipment off of their shores and towards us,” Yang says.

The pandemic added extra complexity to the installation and commissioning of machinery from OEMs located overseas as supply chain bottlenecks intensified. Some processes required in-person visits, adding unexpected logistics as Kruger Products’ staff and vendor representatives complied with quarantine periods on both ends of their trips.

“There was a lot of management and collaboration with them to make sure we got equipment off of their shores and towards us,” Yang says. In some cases, factory acceptance tests were completed on-site rather than ahead of time. The company also invested in technology so suppliers could view the equipment virtually and in real-time to provide support and troubleshooting.

“The TAD is the best in the market right now in terms of ability to generate bulk, and to meet and improve softness and absorbency specifications in our finished product,” says Yang. “What’s fundamentally different with a TAD process over conventional processes is that we’re forming a three-dimensional structure in the sheet, right from when we form the fibres. Combine that with our proprietary materials and it really gives us that competitive edge,” he says.

Puffing up the sheet with air means the TAD machine uses less overall fibre than its dry-crepe counterparts, which in turn leads to reduced fibre costs for the plant. The process does consume somewhat more energy than traditional methods because of the vacuuming and additional TAD step. 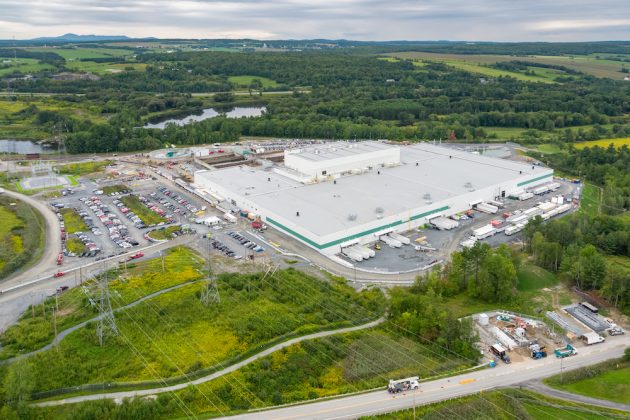 As Kruger Products’ most advanced facility, the Sherbrooke plant makes use of robotics, artificial intelligence and data analytics.

“We’ve invested heavily in the site in terms of digitization of the manufacturing,” says Yang. “The amount of data points that we have is quite advanced.”

Customized dashboards allow operators to dive into production data and access reports on usage, consumption and other metrics, which help the company work toward its lean manufacturing and operational excellence goals.

The forthcoming AI-enabled digital twin application will develop a virtual model of the plant’s entire supply chain and use real-time data augmented with predictive and prescriptive AI capabilities to improve overall plant performance.

“Having the tools and the right mindset come together [create] a very capable team that’s delivering the results that we’re seeing,” says Yang.

“We have far more digital information on this site than any in Kruger Products plant so far, so we’re able to solve the start-up issues that you would typically see in an operation like this,” says Yang.

Staff on the shop floor at Sherbrooke work alongside a variety of robotics, including collaborative robots, autonomous mobile robots (AMRs) and traditional industrial robots housed behind protective barriers. The AMRs transport material using sensor detection to stick to pre-determined routes away from pedestrian paths.

A material handling system makes light work of moving the 100-inch parent rolls between the tissue machine and the packaging area.

“As [rolls] come off the tissue machine, they’re automatically positioned, labeled and wrapped,” says Yang. A collaborative robot arm applies an identifying sticker to each roll so it can be tracked as it moves on to the converting area to be split into consumer-sized rolls.

Automatic conveyors transport the rolls to packaging machines, which bundle and wrap the products together before boxing them up for distribution.

“It’s a pretty lean facility,” notes Yang. “It’s designed with a high-performance mindset. Our approach around operational excellence, what we hired and trained for, coupled with designing the infrastructure, the equipment, the process flow – it’s all designed to be highly efficient, highly automated and highly self-sufficient.”

In pursuit of excellence

The company says its commitment to operational excellence creates a culture of continuous improvement through engagement and empowerment of team members in the operation. The program builds team capabilities through deployment of best practices and development of team proficiencies.

“It is also empowering our teams to own results and to have autonomy decision-making at the line level through deployment of the lean management system,” says Yang.

In a statement coinciding with Sherbrooke’s opening on Feb. 26, Kruger Products CEO Dino Bianco announced the company will increase its investment by $240 million to further expand the facility over the next three years.

Beginning in 2022, an additional paper machine for light-dry crepe tissue, converting line and facial line will be added, growing output at the Sherbrooke complex by at least 30,000 tonnes.

“It’s not the end of a construction or engineering project,” says Yang of the plant’s ramp-up. “It’s really the start of a life of a new facility. They take on their own character — there’s a personality and culture there that we’re building.”

This article originally appeared in the Summer 2021 issue of Pulp & Paper Canada and was updated to reflect the $25-million AI investment announced in June.