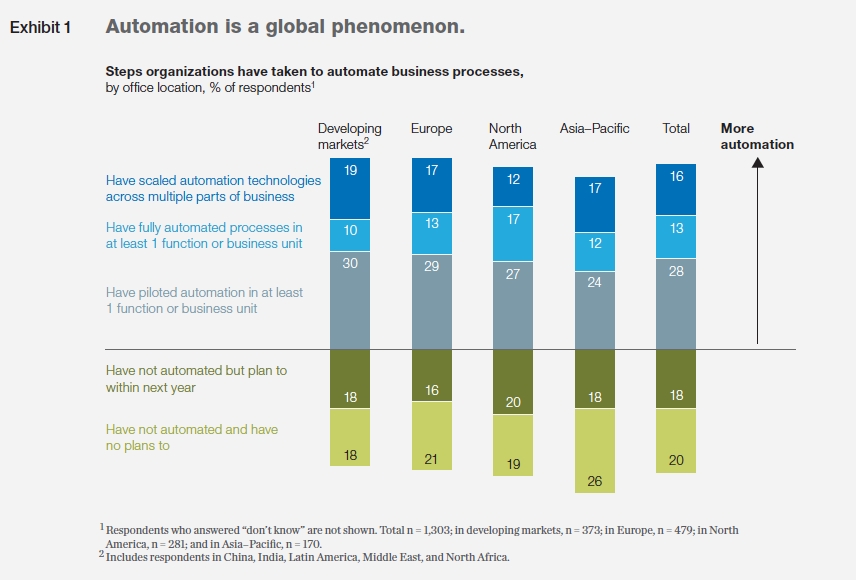 January 21, 2019 – Introducing automation to your operation, whether a simple robot arm or a more complex architecture, can be a costly business – and one that you want to get right, preferably on the first try. So what can you do to mitigate risk and harness the most value out of your commitment?

A new study by consulting firm McKinsey & Company called “The Automation Imperative” surveyed 1,303 people representing various job functions across a number of industries, and aggregated the results to determine some best practices for businesses planning to incorporate automation into their processes.

In particular, researchers examined responses from larger companies with annual revenues of $1 billion or more – where automation is more prevalent – and determined six key areas that businesses should focus on as they move toward automated environments.

1. Make automation a strategic priority. Companies should clearly define their automation needs as part of their strategic planning process, whether they are adopting new technology to keep up with the competition, improve their cost base over the long or short term, or address existing problems with business processes. Beyond defining strategic objectives, the report suggests procuring an executive sponsor for your company’s automation program, and making automation an enterprise-wide mandate – rather than a reactive or functional one.

2. Deploy automation technologies systematically. You need to create a rollout plan and stick to it. Of the respondents at large “successful” organizations (those who report their company has been very successful in meeting automation targets), 50 per cent used an agile approach with rapid testing on technologies before implementation, and 41 per cent employed a top-down approach to deployment. Either method is fine, but pick one and be consistent. Robotic process automation was widespread across all respondents in the survey no matter the success rate of their automation efforts, but the successful organizations are twice as likely to engage more complex automation technologies such as machine learning.

3. Decentralize governance. Having a central team issuing directives is not necessarily the way to go. Respondents at successful organizations are more likely than others to say that their functions or business units are responsible for implementing automation, whereas those at less successful organizations are more than twice as likely to say a central team is responsible for all of their automation efforts. The automation may be more “ownable” if it falls under the purview of individual business units.

4. Ensure the IT function’s involvement. The information technology (IT) department should be consulted early and often. According to the study, the most successful organizations are those whose own IT teams have already automated their processes. More than 75 per cent of respondents from successful organizations say IT was involved at the beginning of automation projects.

5. Internalize both costs and benefits. Management must understand the full scope of the automation efforts to get the total cost of ownership. Reduced cost is the most common benefit, regardless of an organization’s success. The report suggests that keeping automation efforts technology neutral will make your company more agile as technology advances.

The report finds that while smaller companies are less likely to automate processes than larger companies, these best practices still hold true when they do. For instance, more than 80 per cent of respondents at successful small companies report that their IT department was involved in their automation plan from the beginning. Considering the increasing reliance of operational technology (OT) on information technology, this is just good sense.

Implementing robotics, machine learning and other automated systems in your manufacturing operation can be daunting. But with the right plan in place, you will be positioned to realize all of the benefits these technologies provide, including higher production and productivity rates, consistent product quality, reduced lead times, and redistribution of skilled workers to more complex tasks.