Touchscreen monitors are everywhere. The great thing about them is that they are extremely easy to use. A touchscreen functions like an invisible keyboard, but it displays only as much data and button choices as users need to complete a task. That explains their popularity in devices from ATMs to mall kiosks and hospital operating rooms to complex industrial machinery.

The most important decision in selecting the best touchscreen monitor for your application will be the type of touchscreen technology to use. There are several types, each with its own advantages and disadvantages. The three most common types include:

A resistive touchscreen monitor is composed of a glass panel covered with thin conductive and resistive metallic layers, separated by a thin space. When a user touches the screen, the two layers touch at that point. The computer detects the change in the electrical field and calculates the touch point.

Resistive touchscreens are generally the most affordable, but they only offer approximately 75 to 80 percent image clarity. The touch can be activated with nearly any type of object (stylus, gloved finger, etc.), but the outer surface can be damaged with sharp objects. Resistive touchscreen panels are not affected by dust or water on the surface; they are the most common type used today.

In a capacitive touchscreen monitor, a layer that stores a continuous electrical current is placed on top of the monitor’s glass panel. When an exposed finger touches the monitor screen, some of the electrical charge transfers to the user. This decrease in capacitance is detected and located by circuits located at each corner. The computer then determines the touch point.

SAW (Surface Acoustic Wave) touchscreen monitors utilize a series of transducers and reflectors along the sides of the monitor’s glass plate to create an invisible grid of ultrasonic waves on the surface. When the panel is touched, a portion of the wave is absorbed. The receiving transducer locates the touch point, and sends this data to the controller.

SAW touchscreens have no layers on the screen, thus enabling more than 90 percent image clarity, and can display high-detail graphics. They can be activated by a finger, gloved hand or soft-tip stylus. However, SAW panels are the most expensive of the three, and contaminants on the surface (moving liquids or condensation) can cause false triggers. Solid contaminants on the screen can create non-touch areas until they are removed. 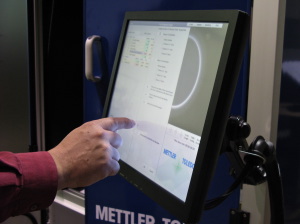 Other factors to consider in your selection process include:

Interface: Touchscreen panels must communicate with the computer. The most common interface types are RS-232 and USB. New HID-compliant touchscreen monitors eliminate the need for drivers.

Mounting: Options include panel mount, rack mount and free-standing. If free-standing, be sure that it uses a heavy-duty stand designed for touchscreen; standard tabletop bases will topple over.

Environment: Touchscreen monitors are available in standard, stainless steel and waterproof enclosures for a variety of environments.

The type of touchscreen monitor you select will be contingent upon many factors, including type of data to be displayed (video, graphics, text), the intended users, the operating environment and where/how it will be mounted. Chosen correctly, touchscreen monitors will be an excellent addition to your system.