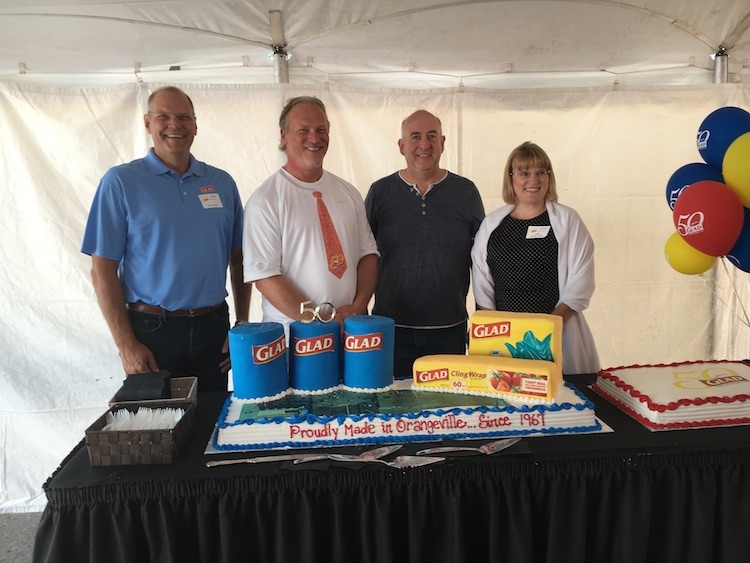 Nov. 21, 2017 – The Glad manufacturing facility in Orangeville, Ont., turned 50 years old this year, and it has never looked better.

“It is a unique milestone certainly in Ontario, if not Canada, for a manufacturing plant to stay operating that long,” says Peter Reynolds, plant manager at the Clorox Company of Canada’s Glad plant in Orangeville.

With a 110-employee workforce, the 128,000-square-foot plant produces indoor, outdoor and compostable garbage bags and Cling Wrap products, making roughly 50 different SKUs in total. About 15 per cent of what Clorox manufactures in Orangeville is exported to the United States.

A nearly 12-year veteran of the company, Reynolds has been the plant manager for the Orangeville location for the last three years and now also oversees the Brita water-filtration plant in North Etobicoke, Ont.

“I’ve worked for a couple of Canadian operations of multinationals and I think that from my vantage point, it tends to come [down to] the fact that Canadians have a very holistic view. When you’re a small plant, you need to be able to do multiple things, whether you’re a manager, a supervisor or an employee,” he says. “I think that flexibility, adaptability and being nimble [allows] you to react to changes in the market. Making business decisions quickly enables [Canadian manufacturers] to be a little bit more responsive to the market and I think that a lot of the time, that’s what separates us from our competition outside of Canada.”

Inside the operation
The plant is essentially divided into two parts, describes Reynolds. “One part is where we extrude the film from a polyethylene resin, and in the other half of the plant we convert the film into bags and put them into various forms of packaging.”

Nine months ago, the plant completed two major capital investment projects. One was a material re-processing system to handle all scrap for reuse internally, and the other was a robotic palletizing and conveying cell. Reynolds says a combination of factors prompted the robotic palletizing project, with safety and ergonomic concerns at the top of the list.

“With 12-hour shifts and an aging workforce, we felt like that type of manual work was better suited for automated equipment. That was the biggest driver for the project.”

Reynolds says the facility has transitioned from primarily manual packaging to close to 80 per cent automation over the past 11 years, with some departments, like the converting area, utilizing more automation than others.

“Anytime that we’ve automated, we’ve always been conscious of the efficiency side of it, and we have balanced our labour force with natural attrition, such as retirement. As so, for the vast majority of the processes we’ve done over the last 11 years, we’ve been able to maintain a steady workforce,” he says. “[Regular investment in a plant] is vital. I think to remain competitive, it comes from innovation you bring to the market, but it also comes from efficiency in your own operation. The two of them go hand-in-hand together in order to sustain your operation and grow your business.”

A focus on sustainability
In addition to its various safety and quality awards, the facility in 2015 achieved zero-waste-to-landfill status, becoming the second Clorox location to obtain the designation. As part of its 2020 Strategy, Clorox set a goal to have 10 zero-waste-to-landfill sites, where 90 per cent of waste is either recycled or composted with the rest of waste sent to a waste-to-energy facility.

The plant achieved the designation by working on and improving its recycling programs, which includes a composting program and training for contractors and new employees. In 2014, the diversion rate was more than 97 per cent, with less than 3 per cent of waste going to landfill, and in 2015, the plant began diverting its remaining non-recyclable material to a regional waste-to-energy facility.

“In Canada, our recycling programs are far more advanced and part of our day-to-day life. As far as recycling things, it’s basically about minimizing the amount you’re putting into landfill,” says Reynolds. “There’s a fairly rigid audit system in order to qualify and we’ve had that designation for two years. We’re proud to have played a part in helping the company reach our 2020 goal of 10 zero-waste-to-landfill sites.”

All about the people
On September 16, the plant hosted its 50th anniversary celebration. Operations were temporarily shut down and plant employees and their immediate families, local dignitaries, and Clorox executives from the U.S. head office gathered on a sunny Saturday to enjoy the festivities.

“We provided plant tours for everybody — we were touring people for about four hours — and then we were outside for a barbecue lunch, some [speeches], a cake-cutting ceremony and lots of pictures. We also had stuff for the kids, like games, toys and face painting. We had something for everybody.”

What makes the plant special is the people, says Reynolds. “It’s the people who have worked here over the years. The biggest part of our recent 50th celebration was having as many retirees return for an afternoon visit, a tour and lunch. It was great to see them all. The fact that we’re working at this plant today is [the result of] the hard work and success that all our retirees created over the years.”

Reynolds believes that having the right people and treating them “fairly and with respect” is a fundamental element of manufacturing operation success. “That will drive a lot of engagement in your workforce and the rest takes care of itself. Once you’ve got people who truly care about the operation, and take pride in what they’re making, that’s the engagement piece.”

One way the facility is dealing with turnover due to retirement is with a more creative recruiting process.

“The biggest challenge for us is to continually improve the training, orientation and qualification of new people in the plant. We’re looking for great employees differently, from hosting job fairs to using electronic media to create a profile that people want to [join]. Our recruiting processes are very different than they were 10 years ago,” he says. “From that process, we have an excellent group of [employees] in the five-and-under-years of service category.”

With 50 years under its belt, the Orangeville plant maintains its drive to stay innovative.

“The next step is to prepare for the next wave of new products. For us it’s always about innovation. We want to lead the categories that we’re in and you have to continually provide something new, different and exciting to the consumer to do that.”

This article was originally published in the November/December 2017 issue of Manufacturing AUTOMATION.