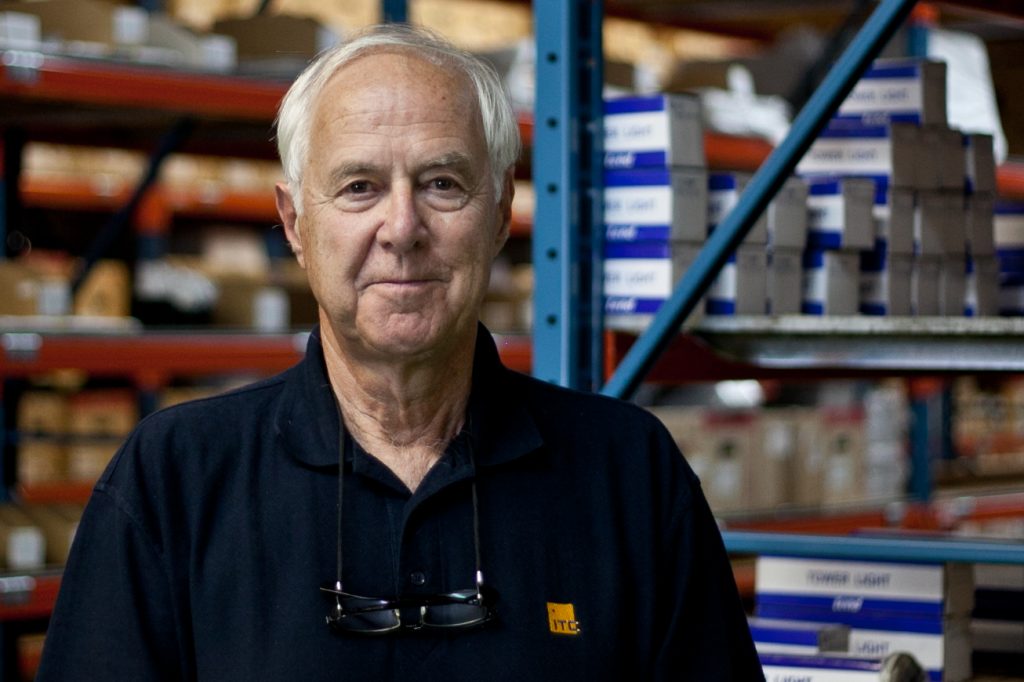 ITC stocks more than 10,000 parts in its warehouse just outside Toronto in Concord, Ontario. Luca Fontana, owner of ITC, calls his inventory “low-tech components for your high-tech business,” which includes hardware and accessories such as DIN rails, enclosures, terminal blocks, pushbuttons, connectors, limit and safety switches, tower lights, and ferrules, as well as cutting, stripping and crimping tools for wire and cable.

“It’s a niche market, but it’s much more stable than being at the vanguard of the market,” says Fontana. “This is stuff that can survive on the shelf before being sold for five years and it’s still good.”

Fontana immigrated to Canada 30 years ago from Italy to work for a local branch of Entrelec, a multinational in the automation and electrical control business that has since been acquired by ABB and now TE Connectivity. When Entrelec sold its Canadian division, Fontana was out of a job.

Armed with his industry knowledge, Fontana founded ITC Electrical Components in 1994 and operated it out of his house alongside his wife Irene, who is the company’s president. The company has since grown to 13 employees and 12,000 square feet of office and warehouse space.

While still involved in the day-to-day operations of the business, Fontana is now succession planning – he’s grooming his son Matteo, ITC’s general manager, to eventually assume control of the operation. “I hope someday to take lots of vacation!” Fontana says. “It’s been an exciting ride for all these 25 years. I only have one regret – that they didn’t fire me earlier.”

ITC stocks and resells industrial components from a range of about 25 mid-sized manufacturers, mostly from Europe, which Fontana says is more advanced than North America in the field of automation and electrical hardware. “In more high-tech fields, North American companies are the leaders,” he explains. With not much North American competition in the space, coupled with manufacturing standards that have unified the market, prices from the European manufacturers have remained relatively low. As a direct importer, ITC has been able to pass on the cost savings of buying in bulk to its customers.

“We never have partnerships with leaders of any field for the simple reason that leaders are already here on their own,” he says. “So we choose medium-sized companies who don’t have the means or the will to establish themselves in North America.”

Among the offerings on ITC’s line card are enclosures from Spelsberg, safety devices from Bernstein and connectors from Ilme. Over the past five years, Fontana says the company has seen increased interest in enclosures, safety devices, both hand and semi-automatic tools, and moulded-case circuit breakers.

“We say that we have good products – perhaps not the Mercedes, but still a good Volkswagen of the product. In price, because we are smaller, we are a bit more economical than our competitors. But the most important thing is service,” says Fontana. “We feel that the reason why we have been growing and keeping a number of happy customers has been the quality of our service. We have huge stock because nobody waits too long for the products. And we have a team of people who are competent and can assist a customer.”

A quarter-century of growth

Fontana credits the “old way” of doing business for his company’s service success over the past 25 years. That means no answering machine – a person always answers the phone – and waiting past business hours if a customer needs an emergency pickup. He employs four full-time and one part-time sales staff in Ontario and Quebec, “and their duty is to run, run, run. It’s the old system, but I think it still works,” he says.

“Most of our customers are very busy. There are less employees per company, they have more to do, and they cannot lose time,” says Fontana. “It’s the fact of being familiar with our customers, and the fact that they know that either we have the answer, or we try our best to find the answer. That’s the most important.”

About 70 per cent of the company’s customers are small- to medium-sized distributors, with the rest purchased by customers who request special products or assemblies directly.

ITC sells about 80 per cent of its overall inventory within Canada, and the rest goes to the United States. “We see much less request from the U.S., probably because they are shy about having to pay more because of the duties,” Fontana says. “That’s recent.”

With that and the other regulatory complications of cross-border sales, Fontana says ITC has focused more on cultivating its relationships with Canadian customers. “My old-world heritage taught me this: never make a step longer than what you can immediately foresee based on what you have,” Fontana says. “We have adapted to the size of this market. And we’ve been growing steadily every single year of these past 25.”