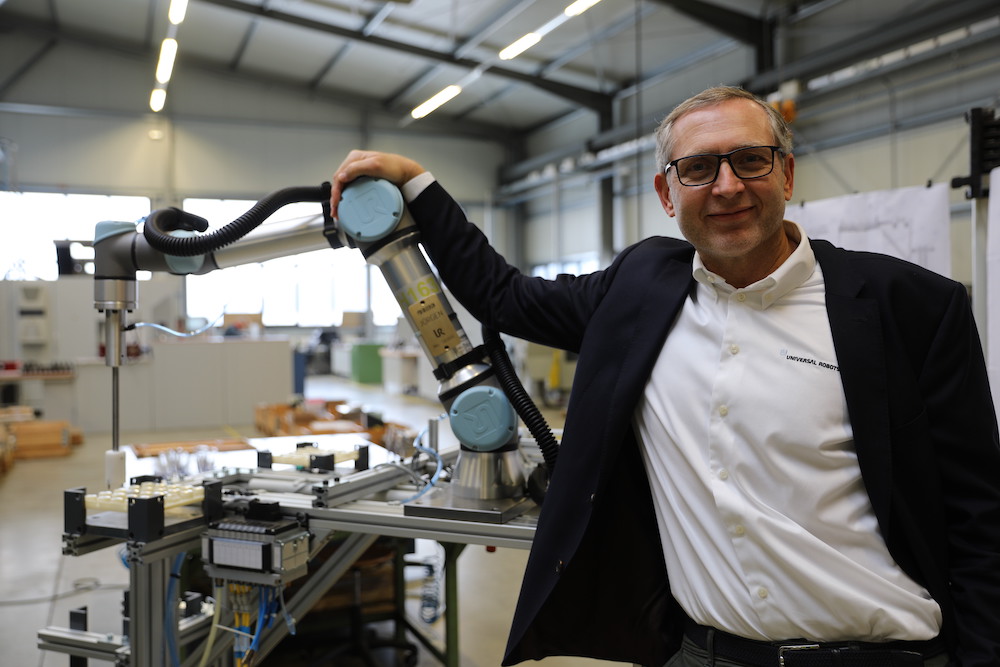 Universal Robots president Jorgen von Hollen, pictured with the company's 50,000th cobot sold, will step down at the end of 2020. Photo: Universal Robots

The president of Universal Robots (UR) will be stepping down at the end of 2020 after four years of leading the company.

Jürgen von Hollen will be leaving UR. He will be temporarily replaced on Jan. 1 by Gregory Smith, president of Teradyne’s Industrial Automation Group, while the company searches for its next president.

The company made the announcement Dec. 14 as it celebrated the sale of its 50,000th collaborative robot (cobot).

“It is such a privilege to end my time at the company by marking this milestone,” says von Hollen in a statement.

“We have worked very hard in the past 15 years to develop an entirely new market segment with a mission to enable especially small- and medium sized companies to automate tasks they thought were too costly or complex.”

Mark Jagiela, president and CEO of UR’s parent company Teradyne, thanked von Hollen for his leadership. “He leaves behind a strong platform for the next level of growth with a talented workforce, an engaged ecosystem of distribution and technology partners as well as an expansive worldwide customer base.”

VEMA’s new collaborative robot will join a fleet of three other UR cobots already deployed in pick and place tasks in end-of-line applications at the company.

The cobots have allowed VEMA to add a third shift, says Christian Veser, managing director at VEMA GmbH. “We have enhanced our productivity remarkably and also achieved better quality,” he says.

“Our employees are freed from ergonomically straining work to focus on quality testing. In navigating COVID-19 challenges, it has also been a great advantage that the cobots don’t need to keep a safety distance or undergo quarantine. They can always work.”