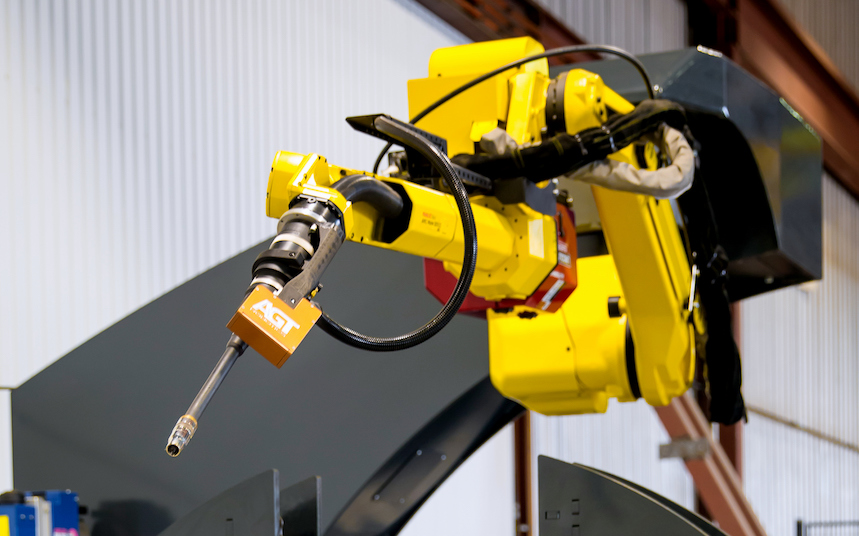 One technology, the BeamMaster robotic welding system from AGT Robotics, has helped McCombs meet these challenges.

“The lack of experienced personnel in the steel industry previously led to overworking our existing staff, which is unacceptable,” says Mac McCombs, president of McCombs Steel. “The BeamMaster, which is nicknamed Bruce, has increased safety, quality and throughput in production.”

Based in Trois-Rivières, Quebec, AGT Robotics was founded in 1992 as a general automation integrator, but now specializes almost exclusively in robotic welding. The BeamMaster system, first released in 2015, uses AGT’s Cortex software with built-in artificial intelligence (AI) and a proprietary simulation engine to optimize weld schedules.

Relying on PC-based control technology, the system is modular and scalable to allow many mechanical configurations for end users. 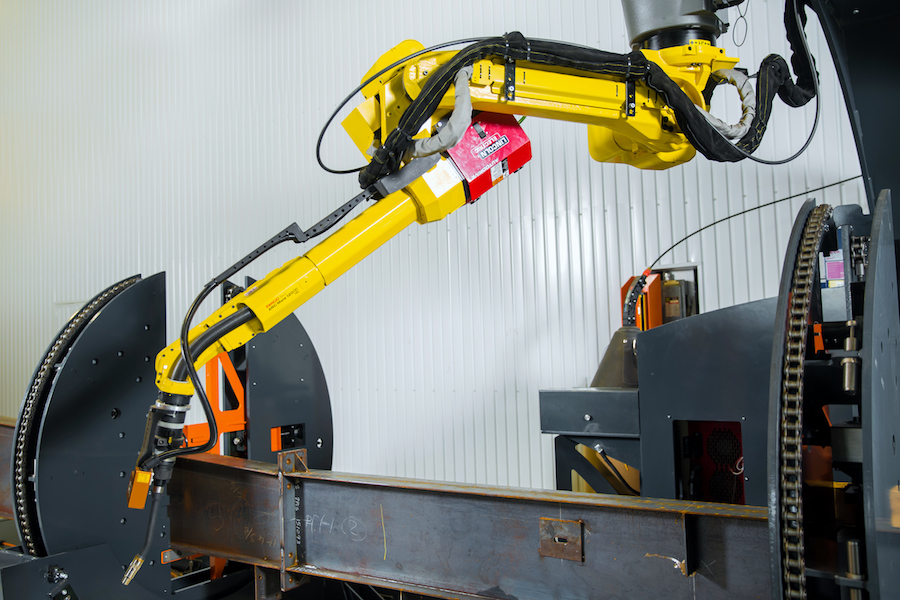 However, the standard version comprises two or more servo-driven beam rotators, a FANUC Arc Mate 120iC articulated robot that moves parallel to the beam along a track and an operator station with a multi-touch control panel.

The circular rotators can handle beams from four to 48 inches wide and up to 90 feet long with a maximum weight of 10,000 pounds. The rotators can turn 360 degrees to expose all surfaces on W beams and HSS closed rectangular columns to increase welding efficiency.

The standard version comprises two or more servo-driven beam rotators, a FANUC Arc Mate 120iC articulated robot that moves parallel to the beam along a track and an operator station with a multi-touch control panel.

While similar robotic welding systems have become widely adopted for automotive applications, very few are designed for structural steel. AGT Robotics recognized this untapped market as a significant opportunity, but one with unique challenges, according to Louis Dicaire, general manager and co-owner at AGT.

“The automotive business produces a few parts maybe 100,000 times, so just a few robots repeat the same tasks for years,” he says. “In structural steel, even though parts are similar, the beams have different widths, lengths, sections and accessories in an infinite number of combinations. That has slowed implementation of robotics in this industry.”

Through its inherent flexibility, the BeamMaster – distributed as the Ocean Challenger by Ocean Machinery in the U.S. – offers a solution.

Design of the BeamMaster presented unique challenges. Robotics can offset a shortage of qualified welders, but constant programming of custom parts often requires additional controls engineers, which are also difficult to find in today’s market.

To avoid this, AGT wanted to produce a system that would automate not only the welding, but also the programming for McCombs and other fabrication shops.

“McCombs uses our machine 24/7, automatically welding most of their beams,” explains François Béland, automation and robotics specialist at AGT. “The structural steel industry relies on the Tekla CAD software, so we built a plug-in that exports 3D beam models from Tekla into Cortex.”

Without requiring a single robotic technician to fine-tune or add to the program, Cortex automatically generates movements. The system offers a complete weld schedule for structural steel.

Hardware and software modularity was important to ensure that BeamMaster systems could be scaled up or down easily as required in the future.

“All joint types are covered, whether multi-pass or single-pass, a quarter-inch weld or a half-inch weld. The sequencing and flipping of the beam are automatic as well,” Dicaire says. “So not only is the operation automated, but the automation programming is also automated: You could say that it’s automation squared.” 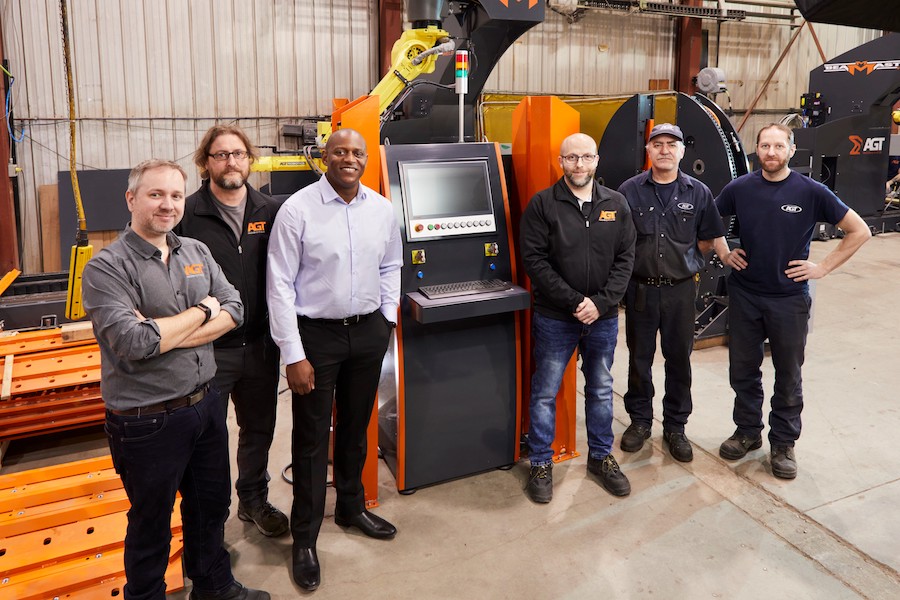 Hardware and software modularity was important to ensure that BeamMaster systems could be scaled up or down easily as required in the future; end users might want to add rotators or even a second robot to increase throughput.

In addition, the platform needed to provide robust remote support capabilities for troubleshooting and updates, since the system is designed for end users around the world with limited engineering resources.

They began working closely with Ted Sarazin, regional sales manager for Beckhoff, to standardize the BeamMaster design. “The openness of the Beckhoff platform, from the company that invented EtherCAT and TwinCAT automation software, was key for AGT,” Sarazin says.

While BeamMaster systems can be quite large, AGT sought compact controller and I/O options to ensure small control cabinet footprints while remaining cost-competitive. 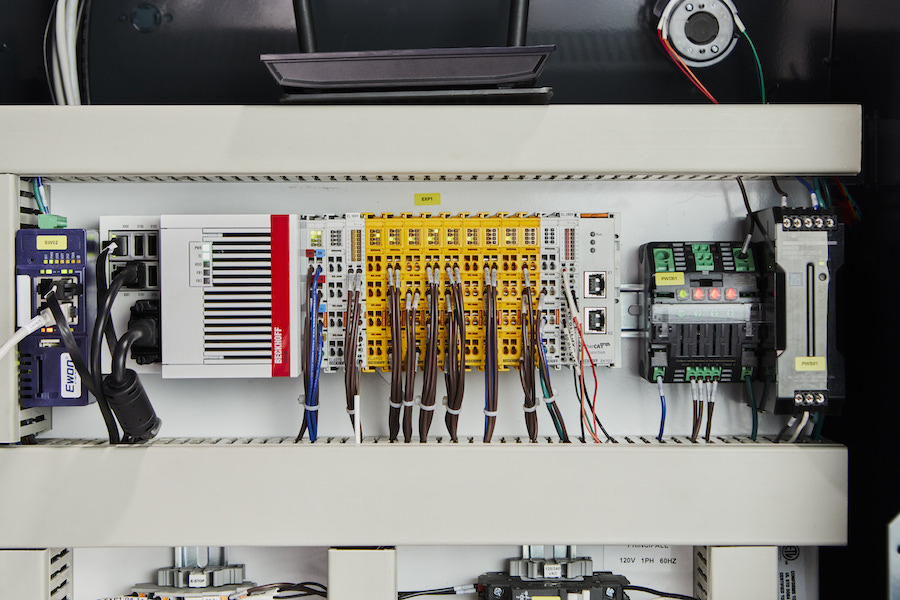 Beckhoff provided the control technologies for the installation for the BeamMaster system. Photo: Beckhoff Automation

“[EtherCAT] is deterministic and does not require IP addresses for each device. As such, it speeds up commissioning through automatic configuration of devices on the network and offers reliable, real-time communication,” says Béland.

The robotic welding system includes several safety zones with light curtains, ensuring that operators approach the beam to perform quality inspection only when the robot is not active in that specific zone. The light curtains connect to TwinSAFE terminals using the TÜV-certified Safety over EtherCAT (FSoE) protocol to communicate safety data via a “black channel” method over the same EtherCAT network used for standard communication.

A platform for robotic welding

TwinCAT 3 provides deterministic control from a software-based master for BeamMaster.

Programming of all functions, from PLC and motion control to safety and HMI, is directly integrated into Microsoft Visual Studio. Engineers can select the language they know best or that makes the most sense for the project, whether it is IEC 61131-3 with object-oriented extensions, function blocks or computer science standards.

“We can develop our own applications – using .NET, for instance – that will communicate directly with the PLC,” Béland says. All PLC code and auxiliary software runs on a CX5130 embedded PC from Beckhoff, connected to a multi-touch control panel as the operator interface.

Beyond the robot equipped with a Lincoln Electric AutoDrive welding source, all other motion control takes place with Beckhoff’s servo drives and servo motors. These provide closed-loop control for accurate positioning of the beam. 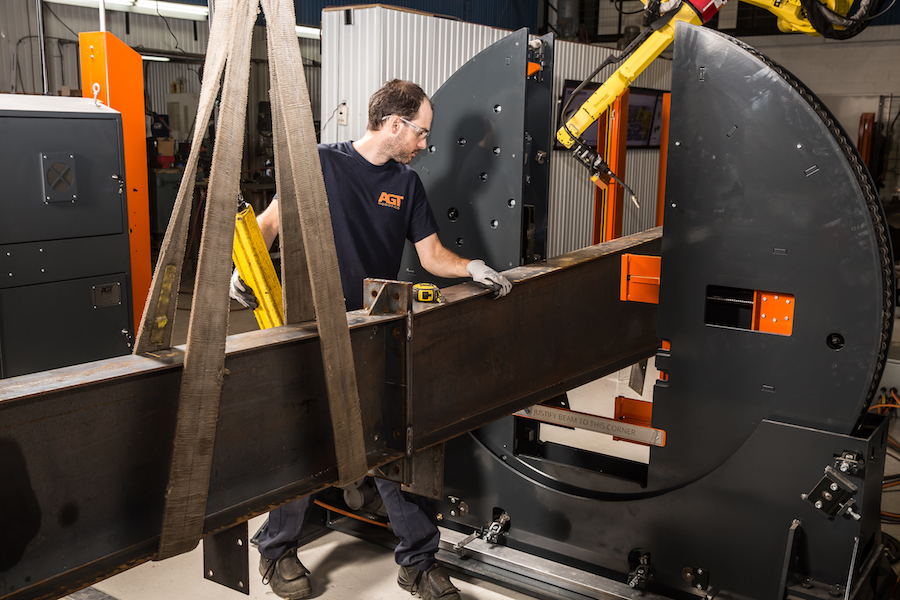 Programming of the first system took two months, but with easy code reuse, that is sped up to just half a day now. “Standardizing on Beckhoff also cut our component costs in half compared to previous solutions while providing more capabilities and options for customization,” Dicaire says.

Before implementing the BeamMaster, McCombs Steel met with AGT and several customers, and carefully considered where it would fit in the shop’s three production bays before it went live in September 2019. “We have experienced a safer work environment, higher-quality construction materials and increased throughput through round-the-clock welding,” says McCombs.

The connectivity of PC-based control allows AGT to provide support and updates quickly. In addition, AGT includes an Android tablet with each BeamMaster so that customers can send images or video to the engineers in Canada assist in troubleshooting at facilities across the globe.

McCombs has appreciated these capabilities and the partnership both companies have developed, and has since commissioned a second BeamMaster system.

This article was originally published in the May 2020 issue of Manufacturing AUTOMATION, and also appeared in Robotics Insider, MA’s quarterly e-book.